Indra, is one of the leading global technology and consulting companies, has developed a revolutionary remote tower solution for air control, which offers unprecedented safety and efficiency levels during landing and take-off thanks to its use of artificial intelligence.

The new system enables savings that can be as high as 50%, since it eliminates expenses related to construction of a physical tower and it increases efficiency and operational use, mainly through work load balancing in “multi-airport” systems.

It is the first solution in the world to incorporate artificial intelligence functions to execute critical air control processes without any need for human intervention.

More specifically, the system employs advanced Deep Learning architectures that have been trained to carry out multiple operative tasks through autonomous machine vision.

It is capable of detecting any operational anomalies in the aircraft’s configuration to report them to the operator. If, for example, the plane’s landing gear is not deployed or if its flaps are not properly open before take-off, the controller is alerted immediately.

In the same way, the system can identify and follow any moving aircraft, vehicle or person autonomously. It monitors the areas of greater interest more closely, alerting to the presence of unauthorized vehicles, people, animals, birds, and even drones that may represent a security risk.

Indra’s remote tower solution is complemented by the company’s ARMS anti-drone system, which can selectively neutralize any UAV. This solution has been implemented to avoid any recurrence of situations such as the ones in December 2018 in Gatwick and Heathrow.

In terms of usability, the solution is integrated with multiple external systems which provide the controller with relevant information directly on the panoramic screen, correlating it with the active aircraft or the one being observed. This way, the operator does not need to take his eyes off of what is happening in the air or on the apron.

By developing this solution, Indra has overcome the current remote tower system philosophy, - which center around replicating the physical tower experience,- and instead has explored a new operational paradigm, where artificial intelligence works hand in hand with people.

The new solution arises as the result of Indra’s long accumulated experience in developing these solutions.

For the first time in the history of aviation, the company, - together with Avinor, the Norwegian navigation services supplier, and the Kongsberg company- has made it possible for a commercial aircraft to land at an airport with the help of controllers who were hundreds of kilometers away.

This milestone was achieved on October 19, when a passenger plane requested permission to land at Rost Island airport from the Bodo control tower, which is located on Norway’s mainland.

The controllers supervised the landing maneuver and remotely provided the instructions to land safely.

It is expected that Bodo’s remote tower will progressively take control of up to 15 airports in the coming months. At a later stage, it could even manage up to 36 of the country’s 46 airports.

The experience acquired in this project, in combination with the company’s R&D work within European programs such as Sesar, are the basis for consolidating Indra’s success in developing the market’s most advanced remote virtual tower solution.

Indra is the only company in the world capable of delivering an integrated response, with its own state-of-the-art technology, to the challenges posed by the sustained rise in air traffic across the globe.

Under the brand of Indra Air Solutions, all its business lines have been grouped together to provide a flight management solution from the moment the aircraft starts to move around the airport until it lands at its destination, which consists of: Air Automation, Air Communication, Air Navigation, Air Surveillance, Air Information, and Air Drones. 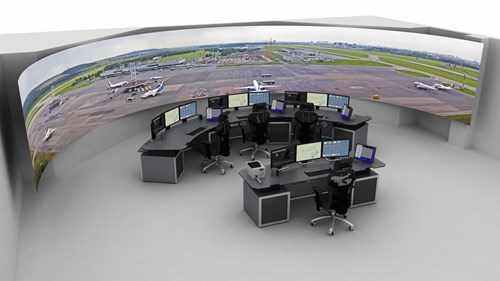