Indra is finalizing development of a new air traffic controller position, the iTEC CWP, which will incorporate the latest features in graphical information display and interface technologies, featuring voice and gesture interaction, line-of-sight detection, as well as touchscreen and keyboard interfaces.

The new design of the iTEC CWP position includes a simple and intuitive interface to help controllers focus on the most relevant information. The system thus integrates communications, flight plan information, aircraft trajectory management and radar surveillance information, all in a single working environment. It will also provide assessments of the likely impact on air traffic had by meteorological conditions.

The system will feature all the latest generation tools for coordination, route modification, conflict detection and land-air data links.

The iTEC CWP also provides flexibility, allowing controllers to configure the information that is displayed on-screen. Thus, they can adapt the position to best suit their role in the control room, while the high definition screen will make for better data visualization and reduce fatigue.

Another important aspect of the new iTEC CWP is the significantly lighter hardware, creating a more silent system that generates no heat, meaning energy savings and a more comfortable working environment. This drives down maintenance requirements and renders the system easier to transport and deploy at air traffic control centers across the world.

iTEC is Indra's latest generation air traffic control system, developed in partnership with air navigation service providers in Spain (ENAIRE), United Kingdom (NATS) and Germany (DFS), while the Dutch provider (LVNL) has also joined the project. Their counterparts in Norway (AVINOR), Poland (PANSA) and Lithuania (Oro Navigacija) have likewise recently expressed an interest in adhering to the initiative, having signed a letter of intent that may see them adopt the system.

iTEC is currently the most advanced latest generation system in existence, with operations having begun this year at Prestwick Airport (Scotland). Toward the end of this year iTEC will oversee 3 million km2 of European airspace and 4 million flights each year, a figure that is set to double over the next five years to 8 million flights annually. The four navigation service providers that are already behind the initiative will see iTEC manage one third of air traffic in the continent, all of which will mean significant savings in terms of flight time, fuel and costs.

The air traffic controller position represents a crucial component in efficient air traffic management. The new developments that Indra has included in the iTEC CWP will allow its partners to select those functions that best suit their needs. 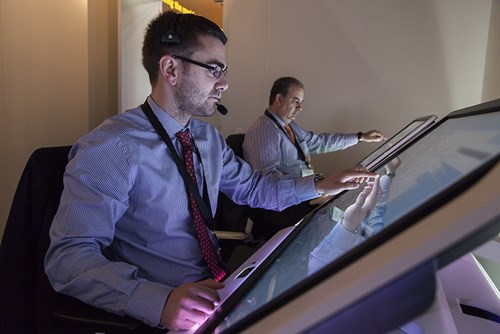