Indra has received the ISO/IEC 27001 international certification, which ensures that the air traffic systems it develops meet the most demanding cybersecurity requirements.

The company has passed the Spanish standards agency Aenor's external audit and became one of the first companies in the sector in the world to meet all the requirements established by the international standard ISO/IEC 27001.

Indra develops ATM systems for customers in 160 countries. In Europe, its solutions are used to manage some of the most complex airspaces with the most air traffic. It is also one of the most important companies involved in the construction of the Single European Sky.

Indra provides the world of aviation with the technology necessary to manage ever-growing traffic more efficiently, cleanly and safely. Its systems have an outstanding reputation and have helped conduct half a million safe landings on more than 1,200 runways.

Indra is also one of the companies that leads the cybersecurity and cyberdefense markets in the world, providing services to large companies, public organizations and armies.

This knowledge and specialization has enabled it to turn cybersecurity into a comprehensive endeavor which supports all of its developments and projects. The company knows that it is only possible to offer secure systems if cybersecurity has been taken into account since the early design phases.

The international standard ISO / IEC 27001 details an Information Security Management System that analyzes and manages the risks and threats to information systems and their processes / assets and applies controls to mitigate them. Its implementation distinguishes Indra from other competitors and improves its competitiveness in a market that is increasingly aware of the cyber risks and costs involved in a cyberattack in terms of reputation, passenger safety, economic losses and legal responsibilities.

The airline industry views security as the cornerstone of its activity. Until now, their centers and control towers benefited from a 'digital' insulation that protected them and made it virtually impossible for them to suffer any attacks.

However, the growing digitalization and interconnection of systems has put an end to this situation. Navigation service suppliers are now immersed in an intense race to strengthen their cybersecurity.

In this new scenario, Indra is the only company with a complete portfolio of proprietary systems that incorporate cybersecurity as part of their design. 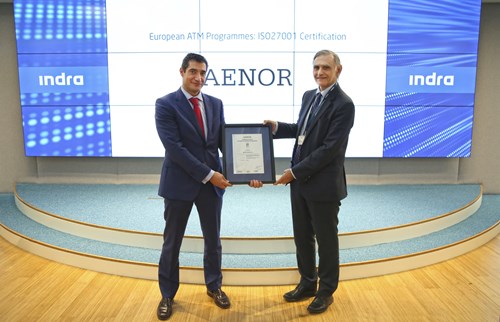