Update on Investigation:
This note has been translated and published by the BEA to make its reading easier for English speaking people. As accurate as the translation may be, the original text in French should be considered as the work of reference. 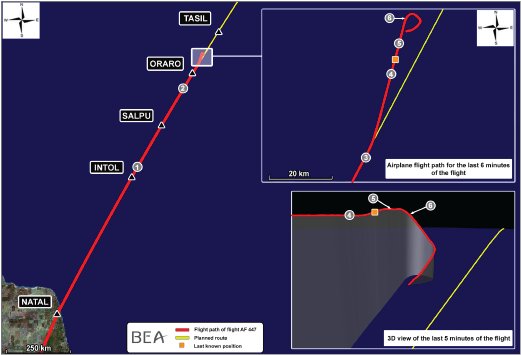 On Sunday 31 May 2009, the Airbus A330-203 registered F-GZCP operated by Air France was programmed to perform scheduled flight AF447 between Rio de Janeiro Galeão and Paris Charles de Gaulle. Twelve crew members (3 flight crew, 9 cabin crew) and 216 passengers were on board. Departure was planned for 22 h 00. (*)
(*) All times are UTC

At around 22 h 10, the crew was cleared to start the engines and to leave the parking space. Take-off took place at 22 h 29. The Captain was PNF, one of the co-pilots was PF.

The take-off weight was 232.8 t (for a MTOW of 233t), including 70.4 t of fuel.
At 1 h 35 min 15 (Map Point 1), the crew informed the ATLANTICO controller that they had passed the INTOL point then announced the following estimated times: SALPU at 1 h 48 then ORARO at 2 h 00. They also transmitted the SELCAL code and a test was undertaken successfully.

At 1 h 35 min 46, the controller asked the crew to maintain FL350 and to give their estimated time at TASIL.

Between 1 h 59 min 32 and 2 h 01 min 46 (Map Point 2), the Captain attended the briefing between the two co-pilots, during which the PF said, in particular "the little bit of turbulence that you just saw [] we should find the same ahead [] were in the cloud layer unfortunately we cant climb much for the moment because the temperature is falling more slowly than forecast" and that "the logon with Dakar failed". The Captain left the cockpit.

The airplane approached the ORARO point. It was flying at flight level 350 and at Mach 0.82 and the pitch attitude was about 2.5 degrees. The weight and balance of the airplane were around 205 tonnes and 29% respectively. Autopilot 2 and auto-thrust were engaged.

At 2 h 06 min 04, the PF called the cabin crew, telling them that "in two minutes we should enter an area where itll move about a bit more than at the moment, you should watch out" and he added "Ill call you back as soon as were out of it".

At 2 h 08 min 07 (Map Point 3), the PNF said "you can maybe go a little to the left [....]". The airplane began a slight turn to the left, the change in relation to the initial route being about 12 degrees. The level of turbulence increased slightly and the crew decided to reduce the speed to about Mach 0.8.

From 2 h 10 min 05 (Map Point 4), the autopilot then auto-thrust disengaged and the PF said "I have the controls". The airplane began to roll to the right and the PF made a left nose-up input. The stall warning sounded twice in a row. The recorded parameters show a sharp fall from about 275 kt to 60 kt in the speed displayed on the left primary flight display (PFD), then a few moments later in the speed displayed on the integrated standby instrument system (ISIS).


Note 2 : In alternate or direct law, the angle-of-attack protections are no longer available but a stall warning is triggered when the greatest of the valid angle-of-attack values exceeds a certain threshold.
Note 1: The angle of attack is the angle between the airflow and longitudinal axis of the airplane.

Note 2: Autopilot and auto-thrust remained disengaged for the rest of the flight.

The airplanes angle of attack increased progressively beyond 10 degrees and the plane started to climb. The PF made nose-down control inputs and alternately left and right roll inputs. The vertical speed, which had reached 7,000 ft/min, dropped to 700 ft/min and the roll varied between 12 degrees right and 10 degrees left. The speed displayed on the left side increased sharply to 215 kt (Mach 0.68). The airplane was then at an altitude of about 37,500 ft and the recorded angle of attack was around 4 degrees.

At 2 h 10 min 51 (Map Point 5), the stall warning was triggered again. The thrust levers were positioned in the TO/GA detent and the PF maintained nose-up inputs. The recorded angle of attack, of around 6 degrees at the triggering of the stall warning, continued to increase. The trimmable horizontal stabilizer (THS) passed from 3 to 13 degrees nose-up in about 1 minute and remained in the latter position until the end of the flight.

Around fifteen seconds later, the speed displayed on the ISIS increased sharply towards 185 kt; it was then consistent with the other recorded speed. The PF continued to make nose-up inputs. The airplanes altitude reached its maximum of about 38,000 ft, its pitch attitude and angle of attack being 16 degrees.

Note: The inconsistency between the speeds displayed on the left side and on the ISIS lasted a little less than one minute.

At around 2 h 11 min 40 (Map Point 6), the Captain re-entered the cockpit. During the following seconds, all of the recorded speeds became invalid and the stall warning stopped.

The altitude was then about 35,000 ft, the angle of attack exceeded 40 degrees and the vertical speed was about -10,000 ft/min. The airplanes pitch attitude did not exceed 15 degrees and the engines N1s were close to 100%. The airplane was subject to roll oscillations that sometimes reached 40 degrees. The PF made an input on the sidestick to the left and nose-up stops, which lasted about 30 seconds.

At 2 h 12 min 02, the PF said "I dont have any more indications", and the PNF said "we have no valid indications". At that moment, the thrust levers were in the IDLE detent and the engines N1s were at 55%. Around fifteen seconds later, the PF made pitch-down inputs. In the following moments, the angle of attack decreased, the speeds became valid again and the stall warning sounded again.

At 2 h 13 min 32, the PF said "were going to arrive at level one hundred". About fifteen seconds later, simultaneous inputs by both pilots on the sidesticks were recorded and the PF said "go ahead you have the controls".

The angle of attack, when it was valid, always remained above 35 degrees.

The recordings stopped at 2 h 14 min 28. The last recorded values were a vertical speed of -10,912 ft/min, a ground speed of 107 kt, pitch attitude of 16.2 degrees nose-up, roll angle of 5.3 degrees left and a magnetic heading of 270 degrees.
At this stage of the investigation, as an addition to the BEA interim reports of 2 July and 17 December 2009, the following new facts have been established: