Joe Sultana, Director Network Manager at EUROCONTROL, presented to Éric Bruneau, Director of Operations at DSNA, and to Tanguy Bertolus, CEO of Lyon-Saint Exupéry airport, a certificate awarding the A-CDM airport label to Lyon airport, in the presence of all the operational actors at the platform.

The Airport Collaborative Decision Making (A-CDM) concept developed by EUROCONTROL for the major European airports makes it possible for all airport partners (air navigation services, airlines, ground handling companies and the airport operator) to take the most effective operational decisions in a collaborative way in order to optimise operations at the airport. This initiative is based on a shared picture of the situation in real time.

As a result, the Lyon approach control centre can manage the departing traffic in synchronisation with the pre-sequencing calculated by Lyon airport’s local departure management system in conjunction with the airlines and ground handlers. This optimised coordination allows better use of runway capacity by both inbound and departing flights, in complete safety, taking full account of local constraints. Furthermore, the traffic loads across the sectors managed by the en-route control centres are more predictable, which is of benefit to the whole European network managed by EUROCONTROL’s Network Manager.

This project, launched by the DSNA and AEROPORTS DE LYON in 2011 in conjunction with EUROCONTROL, is an important step in the modernisation of equipment at Lyon-Saint Exupéry airport. With this label, a first for a regional airport in France, customers and users at this airport can enjoy an efficient and safe service, even in difficult situations (poor weather conditions, technical malfunctions, etc.).

Éric Bruneau, Director of Operations at DSNA, made the following statement: “I would like to congratulate everyone involved in bringing to a successful conclusion this ambitious project, which is based on the sophisticated sharing of operational information in real time. With CDM, Lyon-Saint Exupéry airport offers an even greater degree of safety, which is necessary given the growth in traffic there. There will be a predicted 10% improvement in the punctuality of departing flights and reduced taxiing times, generating savings of almost 800 tons of fuel per year.”

In the words of Tanguy Bertolus, CEO of Lyon-Saint Exupéry airport: “Lyon-Saint Exupéry airport has embraced a strong growth dynamic. To ensure that this development is sustainable, Aéroports de Lyon has chosen to implement and optimise arrangements in phase with the requirements of the airlines and government administrations and to continue to minimise its environmental footprint. This project is the result of seven years of work with the airlines and the air navigation services for aerodrome and approach control at the Lyon’s airport. It is proof of our ability to work together !"

“We are very pleased to celebrate Lyon airport becoming the 26th fully implemented Airport Collaborative Decision Making (A-CDM) airport in Europe”, noted Joe Sultana, Director Network Manager at EUROCONTROL. “A-CDM improves the overall efficiency of airport operations by optimising the use of resources and improving the predictability of events. This improved predictability is an enabler for a safer and more efficient European air traffic management network. The 26 airports currently implemented represent 34% of total departures in the European ATM network. By the end of 2019, we expect this figure to increase to over 45%,” concluded Joe Sultana, Director Network Manager at EUROCONTROL. 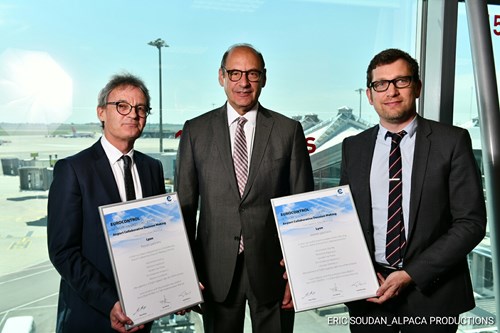