"Optimisation of the European network depends upon arranging airspace around traffic streams between the major international hubs and key terminal areas, rather than along state boundaries. Existing concepts with proven track records - such as MUACs - should be used as models and then extended."

Mr Kloos, for the readers who are not familiar with the EUROCONTROL Maastricht Upper Area Control Centre (MUAC), how would you describe it in just a few words?

MUAC is probably the most striking example of the Single Sky ideal that our forefathers dreamed of for Europe back in the sixties, when they originally set up EUROCONTROL as an air navigation service provider.

MUAC belongs to the EUROCONTROL Organisation, but it is regulated, overseen and funded by the four states whose upper airspace - or part of airspace - it controls. Upper airspace means above Flight Level 245 or above twenty four thousand five hundred feet. This airspace covers an area of some 260,000km2 and lies over Belgium, the Netherlands, Luxembourg and north-western Germany.

In fact, MUAC is the second largest air traffic control centre in Europe in terms of flights and is a key element of the European network. Every 7th flight in Europe passes through MUACs airspace.

One of our main objectives is to maintain and further improve our high controller productivity. Like all the other sectors of the air transport industry, the economic crisis of 2008/2009 hit us severely and last year, we saw a downturn of 7% in our traffic. This years trends are much more encouraging. In spite of the 21,000 flights we lost owing to the volcano eruption last spring, we anticipate a growth of some 2% this year, bringing us closer to the record figure of 1.54 million flights recorded in 2007. This summers average traffic growth is around 4%. This is very good news for all of us. 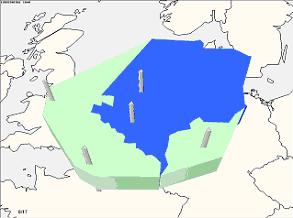 You mention the Functional Airspace Block Europe Central (FABEC) programme which aims to put in place a more efficient air traffic management in the core area of Europe. MUAC and its civil and military partners in six States are actively working on it and the FABEC States Agreement will be signed in December, opening up the way for the formal creation of FABEC. How can MUAC contribute to the success of this undertaking?

In many ways, MUAC was a FAB (Functional Airspace Block) before FABs were thought of! For years, we have been and still are - the only multinational European air navigation service provider. So we have valuable experience in cross-border cooperation; we are well-used to pooling ideas, pooling resources and brokering workable solutions to issues that arise when several states are involved in sharing airspace.

Like our colleagues in the rest of EUROCONTROL, we are firm believers in the Single European Sky and are determined to make an active contribution to it. Our part, were convinced, is to provide added value by sharing our experience of cross-border air traffic management.

Not only do we have this unique and valuable experience but we also have a long tradition of being at the forefront of leading-edge technology, as I mentioned just now, contributing to introduce some of the industrys most innovative technological breakthroughs.

The first digital radar data processing system developed in the seventies, the short-term conflict alert tool engineered in the eighties, the paperless environment and Controller-Pilot Data Link Communications (CPDLC) tested and introduced in the nineties are just a few examples of our pioneering spirit.

Our trajectory-based flight data processing system is a recent example of harnessing technology to help us work better and faster. Today, we are still the only control centre in the world using continental CPDLC (controller-pilot data link communications) operationally, with an average of 300 data link messages exchanged each day. We have advanced safety nets and warning tools; we use elementary and enhanced Mode S. And thats just for now!

We believe that our experience in adopting and making good use of new technology can be usefully shared.

Europe does have a habit of being rather inward-looking and suffering from the not invented here syndrome. National and regional pride can make it hard for people to accept new practices and to share ideas and resources. At Maastricht, we have always focussed on the wider good of the network. We are not hampered by geopolitical issues or national considerations. We treat all aircraft operators and airports the same; we do not give special favour to any one group.

This experience of working together as a team, rather than as a national entity, is, I believe, fundamental. We hope to put it to good use in building functional airspace blocks and so help make the Single European Sky a reality. 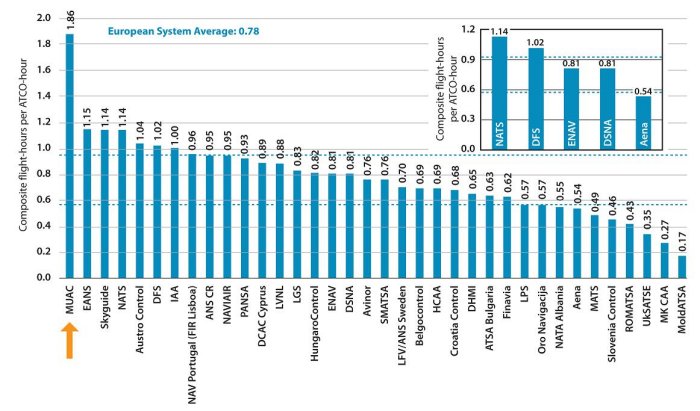 The latest Air Traffic Management Cost-Effectiveness Benchmarking Report for the year 2008, published in June 2010, once again ranked MUAC as one of the most cost-effective of Europes 36 air navigation service providers, with the highest level of controller productivity. What is the secret?

Our secret is that we have an overriding passion for performance. At Maastricht, we invariably focus on the customer, irrespective of who they are or where they come from. When we can help the customer save mileage, fuel and time, we do so.

Moreover, I believe that we have found the right mix between various key operating factors: first and foremost is our cross-border ATM concept, and next, our efficient operational methodologies and procedures, leading-edge technology, efficient staff planning and innovation.

The credit for these high levels of productivity can be given to our staff. Dedicated and highly motivated, they genuinely believe in their mission and in our European concept: to keep the skies we look after safe and fluid - and to help the users of that airspace benefit from optimum flight profiles, the shortest routes, whenever possible, with maximum punctuality.

But our people also have the reputation of being open to technological and operational change. This is a bit unusual - controllers tend to be conservative - but at Maastricht, controllers, operational experts and engineers take pride in being at the leading edge of new developments and they are glad to be trailblazers. This has been the case since MUAC was opened and we are really proud of this aspect of our work.

The airline industry is keen to see rapid improvements in the European Air Traffic Management network. How can we meet this objective to the best possible extent?

The European ATM network has to provide very high levels of safety; effectively match capacity and demand; give acceptable predictability and good cost- and flight-efficiency. It also has to cater for military mission effectiveness as well as pay constant attention to limiting aviations environmental impact.

It is widely recognised that cross-border optimisation of the airspace helps significantly in achieving these goals. At Maastricht, we believe that this optimisation depends upon arranging airspace around traffic streams between the major international hubs and key terminal areas, rather than along state boundaries. We believe that Europes airspace can be optimised in this way if existing concepts with proven track records - such as MUACs - are used as models and then extended.

We have recently formulated what we call the Diamond Concept for the FABEC (Functional Airspace Block Europe Central) programme. This concept reorganises Europes north-western airspace so that air traffic to and from the major European hubs - London, Paris, Frankfurt and Amsterdam - as well as other key terminal areas (TMAs) and their associated large regional airports - like Brussels, Düsseldorf, Cologne, Copenhagen and others - can be handled in the most efficient way.

The Diamond Concept is, we feel sure, a cost-effective, coherent, solution which will promote enhanced ATM performance, no longer constrained by traditional geopolitical boundaries. This concept, in fact, captures the essence of the Single European Sky. Our belief is that air traffic control centres in this region could be rationalised to work together to create one large and efficient operational zone, covering the main hubs.