The new ATC training facility for the Air Force was opened on 23rd April 2009 by Lieutenant General Jack Jansen, Commander of the Royal Netherlands Air Force. 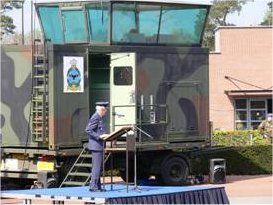 The training building has been extended to house a large 360-degree tower simulator and an advanced radar simulator produced by Micro Nav who are the prime contractor for the turnkey programme. The project was handed over by Rear Admiral Klaas Visser, Director of the Defence Materiel Organisation on behalf of his team lead by Major Gert van Elderen. Micro Nav were represented by Mike Male, Chief Executive Officer and Tom Howard-Jones, Sales & Marketing Director. The spectacular opening ceremony enjoyed a sunny spring day and included a fly-past by Apache helicopters, an aerobatic display by a model helicopter and the unveiling of a celebration banner by a tower cab rising through theatrical mist. The Dutch Air Force will use the new simulators for a range of training for their operational commitments at home and overseas as part of NATO. The realism, flexibility and special tools will allow them to create, adapt and employ new training situations very quickly and effectively . Mike Male said: We are proud to have been part of the team that has delivered this advanced and innovative training system. Together we have delivered the many creative ideas proposed by the Dutch Air Force. We are looking forward to continuing our successful relationship as we support and develop the simulators to meet future challenges facing the Air Force.
your benefits?