NATS, the UKs air navigation service provider, and Oil & Gas UK, are launching today a new system which will improve offshore flight safety. North Sea Multilateration will allow controllers to see helicopters on their radar screens in areas of the North Sea which, until now, have been beyond the reach of land-based radars. This is the worlds first operational use of multilateration to track offshore flights. 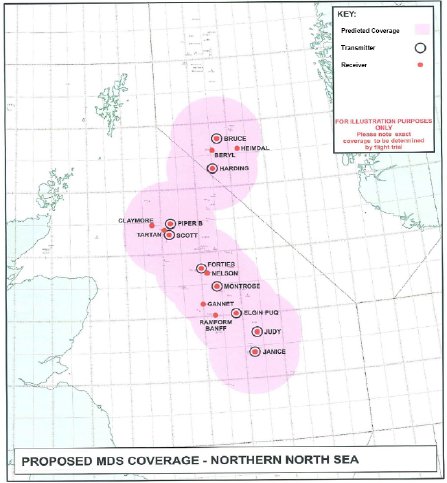 The North Sea Multilateration system uses signal transmitters and receivers fitted to offshore oil and gas platforms in the central area of the North Sea, to track and identify individual helicopters. The data is sent to the control tower at Aberdeen Airport where it provides real-time information for the controllers. Aberdeen Airport is the gateway for the North Sea oil and gas industry and handles more than 25,000 helicopter flights per year, said John Mayhew, NATS General Manager, Aberdeen. Many of the platforms are located in areas beyond the reach of conventional radar, which can only track the helicopter flights up to 80 miles offshore. Beyond that range, we have to transfer to radio-only procedures to monitor the helicopters position. The new system enables controllers to see the flights theyre controlling all the way to and from the platforms, so it will be easier to ensure that they maintain the correct track and height. And in the event of an emergency, the new system will help us to locate the helicopter. The project, which began in 2004, will see transmitter/receivers fitted to 16 offshore platforms. Operating as four clusters of four platforms, the sensors track the helicopter and relay the information ashore. The position information can be derived from a minimum of three signals, but four provides greater accuracy and a back-up in the event of equipment becoming unserviceable. Three of the four clusters are now complete, allowing flight trials to begin later this month, and the fourth cluster is scheduled for completion in January 2010. The new system is expected to be fully operational by June 2010, covering some 25,000 square miles of the North Sea. As part of the project, voice communications have also been upgraded over the same area.
your benefits?