At the high level drone workshop at EUROCONTROL and the inter airport show in Münich, 42 Solutions is releasing a beta version of its App to secure airspaces against non-cooperative drones. By focussing on the collaboration of multiple stakeholders at airports, 42 effectively enables the mitigation of the risks involved in non-cooperative drones entering airspaces of airports.

Recent market research and military intelligence has indicated that the number of drones in and around airports is increasing. Chances of drones colliding with airplanes are therefore ever more present and consequences of collision potentially highly dramatic. When drones are detected in critical zones, airspaces therefore need to be closed. Revenue losses for all stakeholders cannot be redeemed and the safe image of the airport is damaged.

Effective mitigation of the risks non-cooperative drones pose to airport operations requires multiple stakeholders to act effectively in a well coordinated fashion. And that starts already at detection of the drone all the way through to neutralisation. The 42 Solutions CUPS App does exactly that!

When a drone is detected, the CUPS C2 system assesses whether this drone poses a threat. It does this automatically using pre-configured sensitive areas, and the location of aircraft and authorised drones that are obtained from the integrated ATM and UTM systems. The threat is forwarded to the airport tower and the security App when the CUPS C2 operator acknowledges the threat.

The purpose of the App is to provide security forces with information to deal with the drone threats. It does this by providing the real time location of the threatening drone, its heading and history and (if available) its pilot. The situational awareness can be enhanced with further details about the drone, the location of cooperative drones registered in UTM applications and the location of responding team members.

Most importantly, the App enables security forces to react swiftly when there is a real risk and quickly proceed to the pointed location of the non-cooperative drone. Through a reporting function the status of the action taken is communicated to all stakeholders knowing exactly when the situation is normalised again. Air Traffic Controllers are alarmed only when risks of collision are increasing and preventive action in final approach and/or take-off is needed.

The App is expected to add substantial value to all stakeholders at airports in limiting revenue loss and potential catastrophes. The beta version of the App is expected to be tested at Eindhoven Airbase and other Dutch/Belgium airports. Interested airports and airbases are welcome to join the tests. 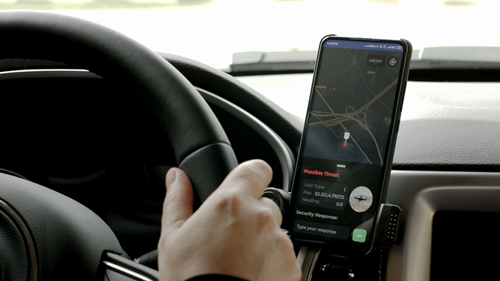 CUPS is a Eurostars project of 42 Solutions, Netherlands and Rinicom, UK and financed by the EU. The system detects non-cooperative drones, assesses threats, shares situational information among stakeholders, has a command and control working position and a ‘human in the loop’-option. CUPS and the mobile App offer jointly enable an effective process to mitigate threats of non-cooperative drones.

The process is fully customisable at the detection and neutralisation stage of the process. Rinicom offers advanced Electro Optical and Radio Frequency detection with Artificial Intelligence in image recognition and drone identification. Radar and other sensors have already been integrated. The system is open to other sensors.