Special Bulletin Magazines
The International Air Transport Association (IATA) announced the aviation safety performance for 2008. The total number of fatalities from aviation accidents dropped from 692 in 2007 to 502 in 2008. 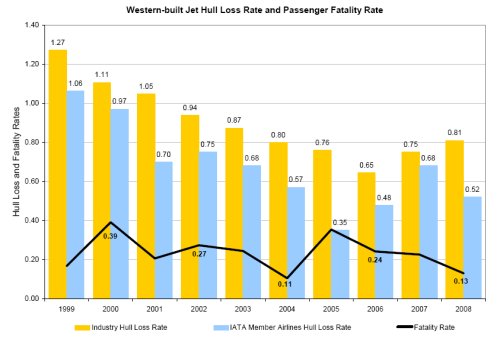 Safety is the industrys number one priority. Todays statistics confirm that travelling by air is one the safest things that a person can do, said Giovanni Bisignani, Director General and CEO of IATA. The IATA Operational Safety Audit (IOSA) is the global industry standard for airline safety management. As of 1 January 2009, IOSA is a condition of IATA membership. Currently, 204 member airlines are among the 282 carriers on the IOSA registry (www.iata.org/registry). A further 21 IATA member airlines are undergoing quality control checks. Airlines that have not passed the quality control process by 31 March 2009 will have their memberships terminated. IATA is a quality association. And the mark of that quality is safety. While we will be strict in upholding the IOSA standards, which are recognised by governments around the world, our goal is to raise the bar on safety with a transparent global standard and bring all of our members on board, said Bisignani. There are significant regional differences in the accident rate. North Asia had a perfect record of zero hull losses in 2008. North America (0.58), Europe (0.42) and Asia / Pacific (0.58) all performed better than the global average. Africa had an accident rate that was 2.6 times worse than the world average (2.12). However, this extends a year-on-year trend of significant improvements. In 2005, for example, the Africa rate was the worst in the world at 9.21. There was one Western-built jet hull loss with an African carrier in 2008. The Commonwealth of Independent States (CIS) had the worst accident rate in the world at 6.43 (7.9 times worse than the global average). The relatively small fleet of Western-built jet aircraft operated in the region means that even a few accidents can skew the numbers considerably. In 2005 and 2007 there were no accidents in the region. In 2006 two accidents drove the hull loss rate to 8.6. Last year there were three Western-built hull losses with CIS carriers. Latin America and the Caribbean had a hull loss rate of 2.55 (3.1 times worse than the global average). The regions carriers had five hull losses during 2008. Addressing infrastructure issues remains a top priority. Middle East and North Africa saw its accident rate worsen to 1.89 in 2008 with two accidents involving carriers from the region. Three issues emerged in 2008: Runway excursions accounted for 25% of all accidents in 2008. IATA will launch a Runway Safety Toolkit in 2009, which it has developed with Flight Safety Foundation. The toolkit will also be incorporated with IATAs broad ranging safety data tools in the IATA Global Safety Information Centre to be launched later this year. Ground damage accounted for 17% of all accidents in 2008. To improve safety and combat this US$4 billion annual industry cost, IATA has launched the IATA Safety Audit for Ground Operations (ISAGO). This is the first global safety standard for ground operations. A total of 80 audits are targeted for this year. A total of 30% of all accidents in 2008 noted deficient safety management at the airline level as a contributing factor. IATA has incorporated a requirement for Safety Management Systems (SMS) into the IATA Operational Safety Audit (IOSA) and is working with carriers at an individual and regional level for effective implementation. These initiatives are consistent with IATAs comprehensive Six-point Safety Programme which focuses on (1) infrastructure safety, (2) safety data management and analysis, (3) operations, (4) Safety Management Systems, (5) maintenance and (6) auditing. Our record on safety is impressive. But the accident in Buffalo last week and all the 502 fatalities in air accidents in 2008 are human tragedies reminding airlines, regulators and industry partners everywhere that safety is a constant challenge and we must always strive to do better. Our target is zero accidents, and zero fatalities. Nothing less is an acceptable result, said Bisignani. View 2008 Aviation Safety performance