NATS has joined forces with the developers of one of the most successful aircraft finder apps to offer flight charts as a bolt-on wallpaper style extra for those interested in seeing more detail.

The controlled version of the NATS Visual Flight Rules (VFR) charts are now available as an extra for subscribers to the Apple version of Plane Finder apps developed by Hampshire technology company Pinkfroot.

Plane Finder allows subscribers with an appropriate mobile device - such as a smartphone or tablet computer - to find out more about aircraft in the skies over the UK.

Pinkfroot developed the app two years ago and it has been downloaded more than two million times. Now subscribers can pay an extra £10 per year to have the NATS charts as an added extra.

The charts are not suitable to be used for navigation by private pilots, but provide extra detail for those people with a keen interest in tracking aircraft across the UK.

Ben Kiff, Head of Information at NATS, said Pinkfroot had approached NATS saying there was a commercial demand for the wallpaper type background such as charts.

“The information in Plane Finder and similar apps that track aircraft is publicly available to anyone with a smartphone or other portable device,” said Ben.

“The charts offered as a wallpaper through the Pinkfroot App are not suitable for navigation - and that is very clear to anyone who downloads or uses the app - but it adds a little extra detail that proprietary mapping systems on other Apps don’t have.

“This agreement with Pinkfroot is an early demonstration of how NATS can earn alternative revenue by thinking differently about the data we have in our business. We are also exploring other opportunities for sharing our data within the lucrative app market”

Lee Armstrong from Pinkfroot said: “Our Plane Finder app has been really successful and we hope that this link up with NATS will make it even more appealing to people interested in finding out what is happening in the skies above the UK.” 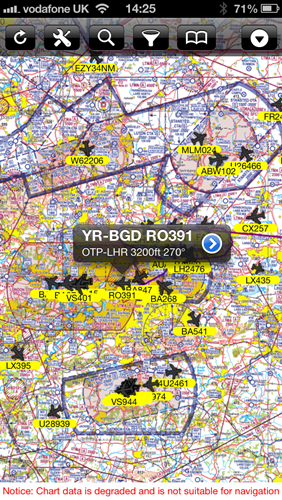