“EoR is a major leap forward in terms of how we manage and integrate traffic and offers significant potential for our major airports,” says Blake Cushnie, National Manager, Performance Based Operations. “The standard builds on the benefits inherent in RNP-AR navigation technologies such as shorter flight paths and flying times  ̶  reducing fuel burn, greenhouse gas emissions and noise.”

As a result of the new standard, aircraft cleared on RNP-AR approach procedures to parallel runways will be able to safely land simultaneously without requiring a separation minimum of 1,000 feet vertically or three nautical miles laterally, which the current conventional standard requires until the aircraft is lined up with the runway, or, “Established on final.” 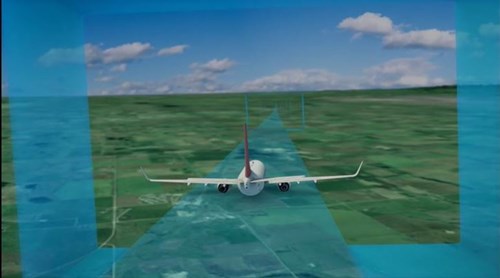 More then 40 per cent of arrivals at Calgary International Airport are currently equipped to use RNP-AR procedures, which have also been deployed at airports across the country. These procedures allow for more flexible procedure design and result in shorter flight paths, highly precise and repeatable flight management, and stabilized paths.

And while not all aircraft will be able to use these procedures, the new standard will support increased utilization of existing RNP-AR procedures while improving overall traffic integration for both equipped and non-equipped aircraft. In some instances, this will include a reduced requirement for low altitude leveling currently required to provide separation.

Safe by design and available for use in almost all weather, each runway at YYC will have curved “radius-to-fix” legs, tangents and crossover legs. The latter will be used when an aircraft are cleared to the far runway.

Through the increased use of continuous descent operations associated with EoR, NAV CANADA is estimating an additional reduction of 2,500 metric tonnes in greenhouse gas emissions in the first year alone. 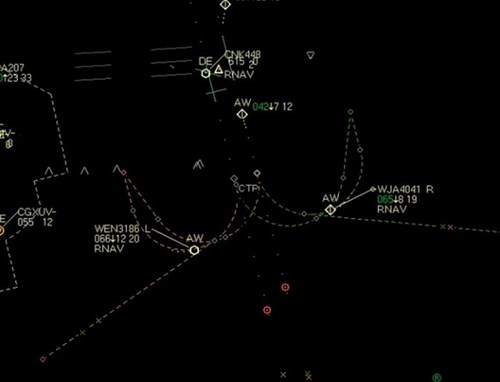 WestJet Encore WEN3186 and Westjet WJA4041 were the first aircraft to fly simultaneous ‘side by side’ RNP AR approaches at YYC using the new EoR standard on November 8, 2018 captured here on a controller’s radar display.

“All of us at NAV CANADA are excited to be the first in the world to leverage the new ICAO standard in the way we have,” says Cushnie. “The milestone is a global one for our dedicated operations staff in Edmonton and Calgary, our PBN deployment team and our industry partners here in Canada and across the globe.

“Colleagues from ICAO, Boeing, the National Airlines Council of Canada, Transport Canada and YYC were all crucial to this collaborative effort and its success thus far.”

A three-year project in the making for NAV CANADA, the EoR concept found its start in an industry white paper published in 2011 by Sheila Conway, Associate Technical Fellow at The Boeing Company. Through industry collaboration, aviation sector leaders at ICAO matured the idea to what it is today – a transformative ICAO standard for handling parallel runway traffic using RNP-AR.

“From its inception, the RNP concept was intended to improve access to terrain challenged airports as well as serve as a tool for traffic management,” says Sheila Conway.

In a safety-focussed industry, innovation happens cautiously and takes commitment. At NAV CANADA, the impetus to take safety and service to the next level is a based on a commitment to delivering value to customers and stakeholders.

“Nothing happens in a vacuum,” says Cushnie. “The expertise of our air traffic controllers combined with airline requirements and participation helped us set the course; we are very fortunate in Canada to have employees and stakeholders that want to play an active role in driving modernization.”

Several airlines in Canada have been key supporters of Canada’s modernization efforts, including WestJet and Air Canada, both founding members of the National Airlines Council of Canada. With a fleet that is fully equipped for RNP, WestJet started using RNP before it was commonly being deployed by air navigation service providers. Today, WestJet is one of many RNP proponents in Canada with a firm understanding of what the EoR standard means.

“After close collaboration with NAV CANADA and other partners over several years, WestJet was thrilled and proud to see EoR implemented at Calgary Airport ̶  our home base,” said David Deere, Chief Technical Pilot.

“As early adopters of RNP capability, WestJet, along with other authorized operators, can further benefit from this leading-edge air traffic management standard. Some of the many operational advantages of this include reduced distance flown on arrival, avoidance of the traditional lengthy high-powered level segments on approach and ultimately a reduction in both noise and environmental impact to the local and global community.”

With 3.3 million flights operating in Canadian-controlled skies each year, NAV CANADA manages one of the busiest airspaces in the world. Collaborating with partners to develop new standards that leverage modern navigational technologies is just one of the ways that NAV CANADA is working to increase value for its stakeholders.