The Almanac integrated MLAT+WAM system, implemented by CRTS at the airport of Mineralnye Vody in 2018, has been put into operation as a source of information for the surface movement control system in the Mineralnye Vody (North Caucasus) ATS centre area of responsibility. The respective order was signed on May 20, 2019.

The Almanac MLAT system was initially installed as an aerodrome surveillance facility designed to locate and control the traffic of aircraft, special vehicles, technical equipment and other objects equipped with responders on the final approach track and the aerodrome movement area. However, operational usage proved that the MLAT coverage area significantly exceeded that area. Therefore, a wide surveillance area was formed, known worldwide as Wide Area Multilateration. State Air Traffic Management Corporation decided to conduct trials of the aerodrome MLAT system as a wide area air traffic monitoring facility within the Mineralnye Vody ATS centre area of responsibility. The trials, carried out together with developers from CRTS, were successfully completed in May 2019. There is a considerable number of domestic and international routes in the Mineralnye Vody ATS centre area of responsibility.  The surveillance altitude is up to FL200, i.e. up to 6,000 metres. ‘The new system successfully provides precise surveillance’, said Oleg Gorely, head of Mineralnye Vody ATS centre.

According to O. Gorely, starting from June this year, required changes will be made to operating procedures for air traffic control personnel to reflect the introduction of a wide area multilateration system providing surveillance on domestic and international routes.

It is worth mentioning that in 2018, the Almanac MLAT+WAM system was implemented in two strategically important Russian airports at a time: St. Petersburg (North-West Federal District) and Mineralnye Vody (North Caucasus Federal District). The systems are now being deployed in Novosibirsk and Yekaterinburg. Next in line are Samara, Kazan, Kaliningrad, and Chelyabinsk. In addition, there are plans to install the system in the airfields of Krasnodar, Vladivostok, and Khabarovsk by the end of 2019.

The Almanac operating principle is that the system, by using satellite-controlled ADS-B stations as sensors, measures and calculates the location of aircraft in an independent and reliable way based on the time difference between signals received from the aircraft. The Almanac Integrated MLAT+WAM system is certified by the Federal Air Transport Agency (FATA) and incorporates the functions of an airfield and en-route digital surveillance facility at the same time. The MLAT+WAM system enables real-time monitoring at altitudes varying from 0 to 20,000 metres. 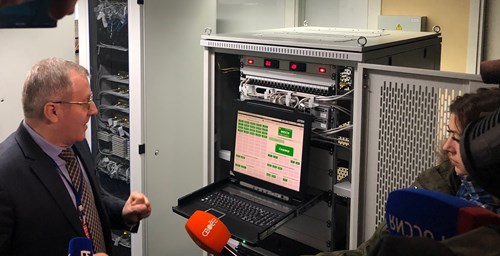