At the end of September real-time SESAR simulations were held for the first time at NLR's facilities. Within the SESAR project, NLR and LVNL have teamed up as consortium LVNL to jointly execute projects. These real-time simulations were part of SESARs project 05.06.04 Tactical TMA and En-route Queue Management, led by ENAV (the Italian Air Navigation Service Provider), in which new techniques are used to ensure that aircraft arrival can be planned earlier. 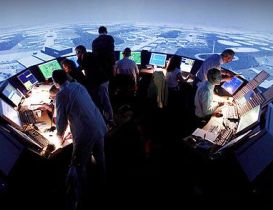 The advantage of early planning is that a more stable and more predictable stream of aircraft is created while minimizing delay. When the planning horizon (from Schiphol airport) is extended in the small Dutch airspace, one easily extends past the Dutch border. For that reason Maastricht Upper Area Control, responsible for handling the high traffic above the Netherlands, Belgium and North-Germany, was also involved in these simulations.

Over the last months, a simulation environment was set up on NLRs research ATC simulator NARSIM allowing inbound traffic to be coordinated above Germany. The Maastricht controllers receive a data-message with a request to clear an inbound aircraft for a certain speed. In The Netherlands, this speed is then subsequently adopted by the LVNL controllers. The speed advice is calculated such that a stable stream of inbound traffic to Schiphol is created that can be more easily handled in the last phase of the flight. This concept, in which speed advices are automatically calculated for inbound aircraft is part of the so-called Speed And Route Advisory (SARA) project of LVNL.

The above Extended Arrival Management operations form a crucial part of the SESAR concept. The results of the simulation will contribute to the overall operational concept of SESAR which aims to modernize the European ATM system.
your benefits?