Scheduled traffic of airlines of ICAO Member States should grow by 6.4% this year in terms of passenger-kilometers performed (PKPs) compared to a decline of 2% in 2009, according to consolidated figures collected by the Organization. 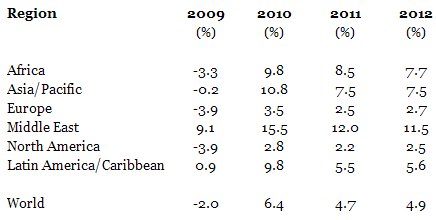 The substantial projected increase reflects positive economic prospects worldwide, based on a 4.5% growth in the world Gross Domestic Product (GDP) as forecast by Global Insight, a major economic forecasting organization. Traffic for Asia/Pacific airlines should grow considerably faster than the global average, due to better economic prospects in States such as China and India, where aviation activity is expected to expand more rapidly. Middle East, Africa and Latin America regions will also enjoy higher traffic growth as economic conditions improve. North American airlines will grow slower than the world average because of lingering economic weaknesses. With expectations of more than 4% annual growth of the world economy for the next three years, world traffic should grow at 4.7% and 4.9% for 2011 and 2012, respectively. The regional breakdown is given in the table below: Regional Growth in Passenger-Kilometres Performed Per Cent Change from Previous Year
2009 Revisited In 2009, PKPs of the world airlines fell by 2% from the already depressed levels of 2008, the steepest drop in air traffic since 2002. Similarly, on the cargo side, freighttonne kilometres (FTKs) performed fell by 10.6 % from 2008, representing also the largest decline since 2002. Total world international passenger traffic fell by 3.4%. With a decline of 6.5%, the Asia/Pacific region registered the largest drop, followed by North America with a 5% drop, while traffic for Europe, Africa and the Latin America fell by 3.4%, 3.0% and 2.5%, respectively. Only the Middle Eastern airlines posted an increase in international traffic, with a gain of 9.1%, allowing them to raise their share of total international PKPs from 8.2% in 2008 to 9.3% in 2009. The worlds domestic markets grew by a modest 0.4% over 2008. The large decreases of 5.4%, 7.4% and 3.4% registered in Africa, Europe and North America respectively, were offset by a robust 8.7% expansion in the Middle East, a continued 5.2% expansion in Latin America and a strong 9.6% growth in Asia/Pacific. Asia/Pacific domestic volumes benefitted from an impressive increase of more than 20% in the domestic Chinese market. A common pattern throughout the world was the growth of low cost carriers (LCCs) at the expense of legacy airlines. Airline Finances Despite the 2009 economic depression, air carriers were able to narrow their losses last year thanks to drastic capacity reductions which helped cut costs and halt yield dilution. In 2009, world airlines generated an estimated operating loss of US$ 4.1 billion. This performance marked a partial recovery from 2008 operating losses of US$ 8.9 billion, but still far from the record US$ 19.9 billion operating profit generated by the airline industry in 2007. The 2008 and 2009 losses resulted from a weak global economic environment that has led to high unemployment and a severe decline in household wealth. Air travel demand continued to be very weak in 2009, with most airlines of the world experiencing reduced traffic and poor yields. The 2008 and 2009 traffic decline prompted the industry to bring capacity more in line with demand, which reduced losses, despite an increase in oil prices ranging from US$ 35/barrel to more than US$ 80/barrel, without showing the extreme volatility of 2008. World airlines emerged from a difficult 2009 well positioned to benefit from a recovery. The financial performance of the worlds airlines is expected to improve in 2010 as traffic rebounds.