What impressed the judges in particular was the scale and pioneering nature of the work undertaken by the PANSA UTM consortium - said Philip Butterworth-Hayes, editor of Unmanned Airspace.

The jury appreciated the work which “involved, inter alia, setting up a complex network of digital communications between controllers and drone operators to make the flight-related process for visual-line-of-sight and beyond-visual-line-of-sight operations quick and easy”.

While the COVID-19 pandemic has ravaged the air transport sector over the past year it is clear from the competition entries that the ATM industry is continuing to innovate and evolve – underlined Claudia Bacco, Assistant Editor of Air Traffic Management Magazine.

Winning of two ATM awards is another distinction for Poland in the area of drone projects. In the last Eurocontrol report Poland was indicated as the leader of the preparation to implement the U-Space.

Poland as one of the first European Union countries regulated issues related to unmanned aerial vehicles. Out of 16 U-Space projects which European countries have to implement before 2030, 9 have already been successfully implemented in Poland and we are working hard on the next six – said Minister Marcin Horała.

Exemplary position of Poland in this area is confirmed also by the report by Drone Industry Insights consulting company. In the report Poland was named the most friendly European country for the drone-involving activities, and the second best in the world just after the Singapore.

Implemented on March 2 2020 PansaUTM system is a foundation of the development of the U-Space concept which covers safe and effective integration of both manned and unmanned aircraft (UAV). This is the first and the only one in Europe operationally deployed system based on digital coordination of UAV flights and digital management of requests and clearances for such flights.

As an air traffic management institution we noticed very early a growing role of unmanned aviation and its numerous applications– stressed the President of the Polish Air Navigation Services Agency Janusz Janiszewski. - We are always attentive to the safety aspect of air traffic and see the need to ensure the safe coordination of unmanned aircraft flights with manned aviation operations. The PansaUTM system is crucial to ensuring fair and safe access to airspace for all users - adds Janiszewski.

PansaUTM consists of the proprietary PANSA operating solutions and the system part integrated with the application most popular among drone operators in Poland– DroneRadar. The system allows for fast, digital, non-verbal communication between air traffic controllers and drone operators. Within PansaUTM drone operators can quickly check flight restrictions in the given area, digitally submit flight plan, and receive clearance for a flight if it does not endanger the safety of other aircraft. For the air traffic controllers PansaUTM in turn provides information about UAV flights planned in the airports’ area and enables issuing clearances for a flight - as is the case in manned aviation.

As underlined by the Head of UAV Operation’s Department Maciej Włodarczyk “this is a huge step forward”. – In total, a year after launching PansaUTM system we have registered almost 300 000 unmanned operations throughout Poland: more than registered manned General Aviation flights in the uncontrolled airspace in 2020 – he explains.

It is worth mentioning that in February 2021 PansaUTM ver 1.2 was operationally deployed. It includes a number of new functionalities for drone operators, air traffic controllers and flight information services officers, i.e. so called automatic clearances function, and since February 3rd PansaUTM system is also functioning at all active air traffic control towers and flight information services in Poland.

As a general aviation pilot and drone operator, to me, the most important aspect of PansaUTM system was to build a bridge between “the traditional aviation” and completely new branch of aviation – unmanned aircraft – said Mateusz Kotliński, Head of U-Space Program and PansaUTM Project Manager. - At PANSA we shared this approach and I am glad that we have created the ecosystem to integrate manned and unmanned aviation, supporting safe procedures and operations especially in the controlled zones in Poland – he added.

There are almost 200 000 drone operators in Poland and that number is fast-growing. According to the estimates of the Polish Economic Institute, by 2026 the value of the drone market will amount to 3.26 billion zloty, which may bring up to 576 billion zloty for the entire economy. Preparing for such changes the Ministry of Infrastructure, the Civil Aviation Authority and the Polish Air Navigation Services Agency are implementing the project "Digital services for unmanned aerial vehicles". The program is worth over 61.5 million, zloty, 85% of which (51 million zloty) was obtained from EU funds under the Digital Poland Operational Program. 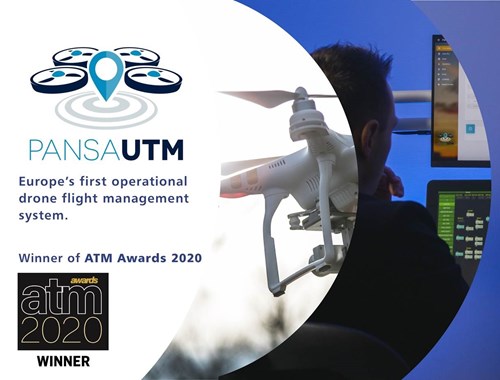