The world’s first ever all-female flight inspection crew recently returned from a deployment to Morocco.

Headed up by Carole Thompson from New Zealand’s Radiola Aerospace, it’s believed this is the first time anywhere in the world that an all-female crew has undertaken a flight inspection mission.

The crew was made up of Captain Evelyn Sissingh and First Officer Louise Courtney, both of Radiola’s prime aircraft provider, Diamond Executive Aviation (DEA) based in the United Kingdom, and Carole Thompson as Inspection Group Manager for Radiola.

Like most of Radiola’s European, Middle East and African operations this deployment came out of the company’s United Kingdom operating base.

Mr Weston says the partnership between Radiola and DEA continues to ensure efficient and reliable completion of demanding deployments around the world.

“Not only is it something new to have an all-female flight crew but to have that crew undertake a deployment in a completely differently cultural environment made it even more unique,” says Mrs Thompson who has worked with ONDA in Morocco for many years.

“I’ve been working in Morocco since 2000. Back then I was a bit of a novelty and had to work hard to establish credibility.” That having been established the Moroccans recommended Carole and Radiola to the Libyans where they provided flight inspections throughout the country during very difficult times.

“During the Morrocan deployment we were often flying long hours and much of the time at low levels. The work is very intense,” says Mrs Thompson.

The deployment achieved initial validation of GNSS procedures at Tetouan airport as well as the routine flight inspection of the CAT III ILS at Casablanca Mohammed V airport.

A representative from Office National Des Aéroports says they are very satisfied with the work carried out by Radiola Aerospace Ltd over the years and that this short deployment was no exception.

For Carole the best part of operating with an all-female crew was the ability to have some like-minded women to spend down-time with in the evenings away from the normally heavily male dominated industry.

“I’ve been working in the industry for 25 years and I’m one of only about three or four female flight inspectors in the world. I’m used to operating in an all-male environment but it was nice to be able to go out for dinner in the evenings and talk about something different. It was a refreshing change.”

Crew composition depends on a number of variables so it may well be sometime before another all-female crew undertakes flight inspections, says Mrs Thompson.

Radiola provides flight inspection and validation services all over the world from its subsidiary company in the United Kingdom and its operating bases in Nairobi (Kenya), Lima (Peru) and Tortola in the British Virgin Islands.

Through its partnership with DEA in the UK and their fleet of 10 Diamond Twinstar DA42 aircraft, Radiola has completed flight inspections from the UK in places as far afield as Mozambique, India and Iraq. 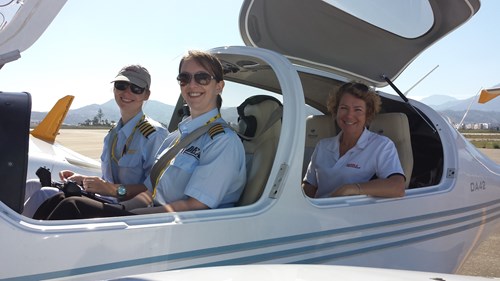