With the IR 44 CF-II AVRE (Ambient Voice REcording), ATIS brings a new member of its tried and tested IR 44 recorder family onto the market, which is specifically adapted to meet the new requirements in air traffic control. 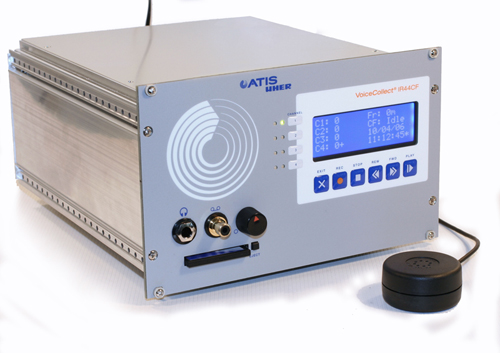 Against the backdrop of the proposed ICAO recommendation with effect from 1 January 2010 and the national directives which are derived from this in the individual countries, this recorder permits the recording of background conversations and ambient noise at air traffic controllers work stations fully independently from the conversation recording devices that are connected to the voice communication system. Up to 4 room microphones can be attached to the AVRE unit. ATIS offers special, highly sensitive microphones for this purpose. However, due to the systems flexible interfaces, it is also possible to use microphones from other manufacturers. The IR 44 CF-II AVRE is operated and configured using function keys and an LC display. Separate keys are available for direct selection of the individual recording channels (up to 4), with LEDs indicating the status of each channel. The device can, however, also be integrated into the air traffic controllers work stations. In this case, operation and configuration can be effected completely via the network. An integrated, adjustable loudspeaker is available for replay from the device itself. In addition, using a software client, the recordings can also be played back over a TCP/IP LAN or via a CF card on any external PC or notebook. To connect headphones and ancillary equipment, the IR 44 CF-II AVRE also has outputs in the front panel. And: recording and playback is possible simultaneously and independently from each other. With the AVRE device, all recordings are archived on removable CompactFlash cards. Thanks to high-performance voice compression, a single 1 GB card can store up to 400 hours in excellent quality. For further processing or long-term archiving, the recordings can be exported as standard WAV files or in ATIS own proprietary format and stored on any medium. ATIS AudioCenter application additionally allows all recordings to be automatically archived via a LAN. Depending on the individual requirements regarding data and privacy protection, the archiving period can be set to any time desired.
your benefits?