The defence and security company Saab and the LFV Group, operating 16 airports and responsible for air navigation services in Sweden, have received an award for their joint efforts in enabling remote air traffic control. The award is from the Jane's Information Group, handed over in Amsterdam during an air traffic control convention. 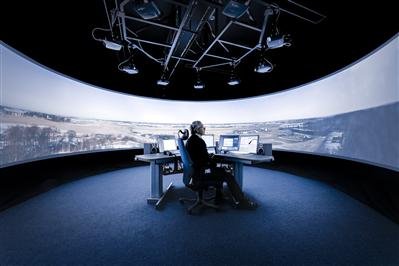 Saab, with LFV Air Navigation Services as its operative partner, has developed a solution that enables management of air traffic control at small and mid-sized airports from a common air traffic control centre. Cameras and sensors are installed at the airports and everything they register is linked in real-time to a common air traffic control centre and projected in a 360-degree view. The system was successfully tested at Ängelholm Airport in 2009 and has now received an award for its contribution to safer, more efficient and environmentally friendly air traffic. "It feels great to get this kind of recognition for our solution," says Per Ahl, sales manager for Saab's air traffic management systems. "We've worked hard to build a safe system that is easy for air traffic controllers to use, and along with the tests we've already conducted, we see the award as further confirmation that we've been successful." The jury consisted of the Federal Aviation Administration, the International Civil Aviation Organization, the Civil Air Navigation Services Organization, the International Air Transport Association and Janes Information Group. Safe and economic, remote air traffic control The reasons for controlling air traffic at several airports from a common control centre relate both to economy and safety. At small and mid-sized airports, traffic is unevenly distributed over the day, with occasional peaks when the workload is higher. Instead of keeping several air control towers open, resources can be co-located. This is a part of LFVs development work to improve our products, while at the same time lowering costs for our customers. Im happy to see our work being appreciated, and I hope that we within a year or so will see the system in operation, not only in Sweden but also in other parts of the world, says Thomas Allard, Divisional manager for LFV Air Navigation Services. In regard to safety, there are several advantages: The award handed over at the air traffic control convention, ATC Global in Amsterdam recognises significant developments that lead to safer, more efficient and more environmentally friendly air traffic.