Special Bulletin Magazines
In a joint project, Saab and the LFV group demonstrates how air traffic services can be managed remotely. With the new system, it is possible for one person to handle the traffic around up to three airports, resulting in reduced costs and increased security. 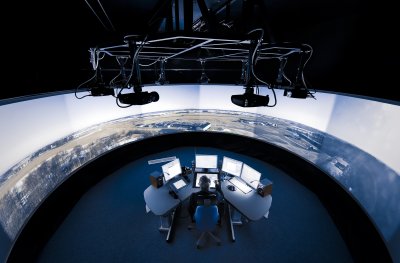 An aircraft took-off and landed at Ängelholm Airport today, entirely under guidance from Malmö Airport about 100 kilometers away. The system, which is called ROT (Remotely Operated Tower), makes remote air traffic services possible. This way of working leads to increased security and cost savings a matter of survival for smaller, regional airports. In the development project cameras are mounted on the air traffic control tower in Ängelholm. Images from the cameras are transmitted to a flight control centre at Malmö Airport where they are projected onto the wall in a circular room, similar to an air traffic control tower. In the control centre there is an air traffic controller directing the traffic just as they would from the tower itself. At many small and medium-sized airports, the traffic is intense at certain times, while at other times of the day it is significantly quieter. When an air traffic controller takes responsibility for several airports, resources can be allocated more effectively and moreover, any equipment required can be invested in jointly. There are multiple safety aspects. Using cameras to detect any changes in the picture, dangers can be discovered more easily, for example forgotten tools that have been left on the runway. The air traffic controller can also zoom-in on anything of interest using the cameras. Furthermore, events taking place in the sky and around the airport can also be recorded and replayed later, for example following an incident.