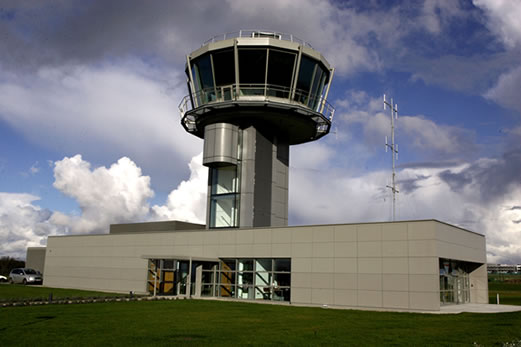 In all, 27 staff were involved in the move, including air traffic controllers, engineers, as well as management and administration staff. Notwithstanding the current decline in traffic figures, this move positions the IAA to deal with anticipated traffic levels at the airport for the next 15 20 years. The €7.5 million project was delivered on time and within budget and was paid for entirely by the IAA with no Government funding. The main driver behind the construction of a new tower was the necessary upgrade of the Air Traffic Management (ATM) system so as to provide connectivity between Cork and the ATM system in use at the IAAs air traffic control centres at Shannon and Dublin. Re-equipping in the old tower was not feasible without significant interruption to services. Also, as the old building would have required an extensive and costly refurbishment, the decision was taken to build a new control tower. It is located across the runway, one kilometre from the old tower on the western side of Cork airfield. Mr. Donie Mooney, IAA Director Operations noted; Cork operations staff are now better equipped and have a top class working environment from which they can continue to provide top quality air traffic management services to our customers. After extensive planning, the complex process of moving operations from one control tower to another consisted of a period of live testing in early / mid October followed by a period of dual operations using both control towers. Gradually operations were transferred to the new tower with back up services being provided from the old tower. Then, on schedule, at 0001 on 20 October operations transferred exclusively to the new tower. Back up services were withdrawn at 1300 on 21 October. Construction of the tower commenced in August 2007 and took ten months to complete while fitting out and testing the upgraded ATM system took until mid October 2009. Speaking about the project, IAA Chief Executive Mr. Eamonn Brennan said; this multi million euro investment demonstrates the IAAs commitment to Cork and to its long term future. I congratulate all involved for delivering this project on time and within budget.