As part of the harmonisation of European airspace, shorter night routes are now being offered on 115 cross-border connections. These more environmentally friendly and cost-saving routes were made possible by FABEC (Functional Airspace Block Europe Central), where the air navigation service providers in Belgium, France, Germany, Luxembourg, the Netherlands and Switzerland are working on a joint airspace. 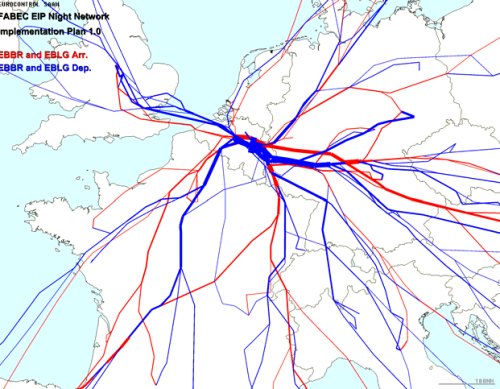 The goal of FABEC is to offer pilots in European airspace as many direct routes as possible. Today, FABEC has shortened the 115 routes during the night which enables the airlines to save 800,000 nautical miles per year, which corresponds to approximately 1.481 million kilometres. This results in savings of 4,800 tonnes of kerosene and 16,000 tonnes of CO2. It was possible to offer these shorter routes to the airlines due to the fact that air traffic decreases
significantly at night and that military training airspaces are also mostly inactive at this time. The shorter routes are particularly beneficial for cargo aircraft, which often operate at night.

In Belgium, the benefits provided by the improvement of the night routes are mainly noticeable on the overall FABEC network. The national airports concerned are those with an important cargo activity, such as Liege Airport, which is the sixth largest airport in Europe concerning night departures and the airport of Brussels National, which is the seventh largest as regards night arrivals. The potential gains from the FABEC night route network are substantial
for the airline companies and therefore also favour the development of freight activities at the Belgian airports. Belgium applies the night network from 00H00 to 06H00 (UTC Winter 23H00-05H00 and Summer 22H00-04H00).
The FABEC partners view this first measurable success as confirmation of their intention to press ahead with the harmonisation of European airspace. Not only will this support better routing, but it will also make a significant contribution to
environmental protection.
your benefits?