SITAONAIR has hailed the successful launch of Iridium’s second set of Iridium NEXT constellation satellites as another step closer to achieving minute-by-minute, 100% global aircraft flight-tracking.

In partnership with Aireon and FlightAware, SITAONAIR’s AIRCOM® FlightTracker will deliver enhanced capabilities to airline customers from 2018. Aireon’s space-based automatic dependent surveillance broadcast data (ADS-B) will then fill any gaps in current flight-tracking coverage globally – and is expected to be transmitted through the complete Iridium NEXT satellite constellation, via FlightAware.

Paul Gibson, Portfolio Director, AIRCOM®, at SITAONAIR, says: “This is an exciting moment for SITAONAIR as the second set of satellites start their journey to enabling us to deliver 100% global, real-time flight-tracking to the air transport industry. We are looking forward to seeing the project progress and being able to demonstrate its value to airlines.

“The beauty of adding space-based ADS-B data to our current AIRCOM® FlightTracker is that it will integrate seamlessly into the existing interface, while increasing tracking coverage up to 100%. In short, the airlines who adopt our space-based flight-tracking will have the tools to see the precise position, speed and altitude of all airborne fleet – any time, anywhere – and be immediately alerted if any aircraft veers from its flight plan, even if that route is over ocean or the Poles.

“With real-time alerts generated at least once a minute, airlines with enhanced FlightTracker will be way ahead of the ICAO’s best practice one-minute mandate – truly consolidating their commitment to safe travel.

SITAONAIR’s AIRCOM® FlightTracker is currently used by over 60 airlines worldwide. 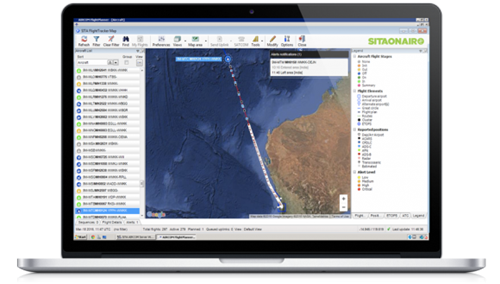 Paul continues: “The SITAONAIR Montreal Development Team has already determined how the new space-based ADS-B data should be integrated and presented within FlightTracker. The display uses specific color-coding to identify different data sources, and, for us, it is a case of drawing in this data and giving space-based ADS-B its own distinct place in this set.”