During the first two weeks of May, the Federal Aviation Administration (FAA) in the USA has been hosting a very important event, aimed at the verification of the true interoperability between equipment from different vendors. The goal is to check whether VCS systems, radio devices and recorders can work together using the brand new ED137C standard, i.e. the C version of the world famous ED137 standard on VOIP in the ATM field.

14 vendors gathered in Atlantic City to run a large number of tests, thus proving the completeness and robustness of the standard on one hand and of their equipment on the other hand. Pairings between all vendor equipment have been executed, in order to allow e.g. SITTI VCS system to be interfaced to any other VCS, Radio, Recorder from different manufacturers.

SITTI has been participating in the event with a full ED137C standard compliant system, composed by Controller Working Positions and radio/telephone VOIP interfaces. The result of the tests has been beyond expectations, thus not only confirming the compliance of SITTI systems to the latest available standards, but also consolidating the modular and scalable software and hardware architecture of the MULTIFONO(r) M800IP(r) VCS system. 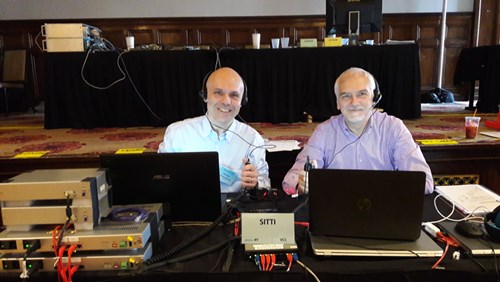