With the goal of further expanding their offer to passengers travelling from West to East and from North to South (and vice versa), Turkey is underway the construction of a new airport on the European side of Istanbul. The Istanbul New Airport planned to be the largest airport in the world, with 150 million annual passenger capacity, possibly expandable to 200 million, if required in the future. As of May 2018, around 90% of construction is completed. The inauguration of the airport is planned to take place on 29 October 2018. 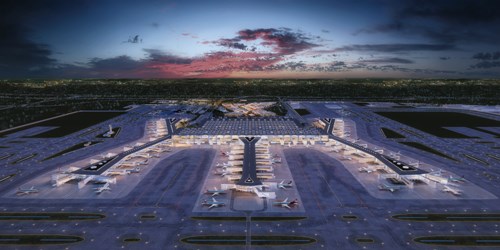 SITTI is part of this exciting project, by providing the Voice Communication System (VCS) which will allow efficient and effective handling of all voice communications between controllers and pilots for a safe and smooth control of the traffic landing at or departing from the new airport. The MULTIFONO® VCS being provided is based on the VoIP technology, according to the most recent definitions and specifications of the international ED137 standard. The supplied system encompasses 39 controller working positions (CWP) that will be capable of interfacing up to 420 Rx/Tx radio channels (both analogue and VoIP) and several analogue and VoIP telephone line. NTP server, VoIP recorder and Emergency radio panels have been provided along with Voice Communication System. The new VCS will also have E1 and VoIP connectivity with the existing SITTI system installed in SMART Approach/TWR center in order to share radio/telephone resources between the two VCS.

SITTI is proud to contribute to this huge project, which is confirming SITTI as a primary VCS manufacturer and supplier worldwide, capable of giving prompt and top edge solutions to Customer needs, both in the Civilian and Military fields. The leading edge, redundant, non-blocking architecture of the MULTIFONO® M800IP® provides flexibility and modularity for easy expansion and addition of further functionalities.