DHMI, the Turkish State Airports Administration is currently upgrading their VCSs (Voice Communication Systems) and network infrastructure to comply with the latest air management standards, especially concerning the world famous EUROCAE ED-137 standard, which details the way VoIP – Voice over IP – has to be used in the ATC (Air Traffic Control) field.

SITTI has already been providing DHMI with TDM-based VCSs that have been installed at all main ACC centres for the management of the air traffic in the Turkish crowded skies. Such VCSs proved their robustness and reliability to a so large extent that DHMI is not going to replace them, rather to use them in parallel to the new VoIP-based systems.

The new VCSs that SITTI is installing at the main ACC and APP centres in Turkey (Ankara, Istanbul, Izmir, Antalya, Bodrum, Dalaman) will give access to a huge number of remote radio sites, in total accordance to the latest standards. Just as an example, the sole Ankara ACC will have the capability of managing more than 2400 remote VoIP radios. Similar dimensional capacities are possible at all other sites, with easily installable new interface that can be added to the system on-the-fly. The total number of new CWPs provided in this project is around 390 and the VCSs have been equipped for a total capacity of 4900 VoIP radios.

The new VCSs are accompanied by voice recording systems that complement the short-term recording feature available at each controller working position (CWP). The transition plan by DHMI foresees that controllers will be provided by a second touch screen device (CWP) for the access the new VoIP VCS features, until the time when the old one will be removed and controllers will have access to both the new VoIP and the old TDM-based VCSs from a single device.

“The modernization and upgrade of the existing VCS systems and network infrastructure” –Marco Scalia, SITTI Program Manager, says – “will allow the Turkish State Airports Administration to implement the latest top-edge technical achievements in the ATC field, to provide a more reliable and efficient service to airlines, thus making the routes between Europe and Asia even more safe.” 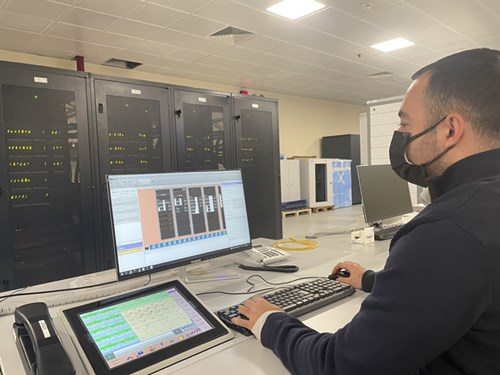