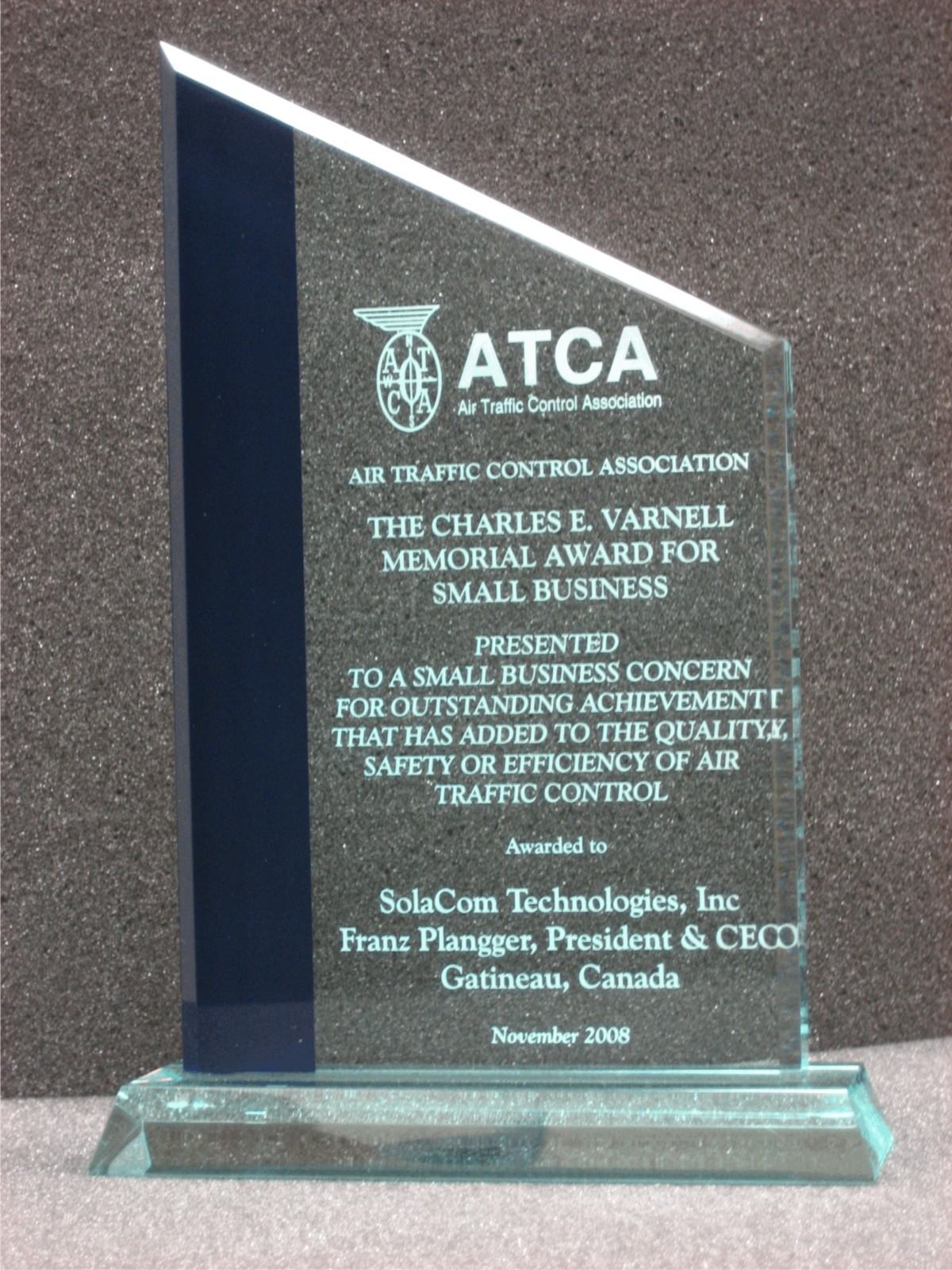 The award is presented to a business whose outstanding achievement or contribution has added to the quality, safety or efficiency of the air traffic control industry. We are extremely honored to have been given this prestigious ATCA award, said Franz Plangger, President and CEO. To be recognized for such an award by your industry peers is a great accomplishment and confirms that we are on the right track and that all of our hard work is not going unnoticed. SolaCom and its CEO Franz Plangger have been recognized for their contribution to one of the most significant advances in aviation technology in the past quarter-century. The Flight Services for the 21st Century (FS21) program, which was the first nationwide, networked communications system in the US National Airspace System (NAS). The FS21 provides all flight service specialists and pilots access to flight plan information from a single, common database. In excess of 15,000 calls are now being handled by the system every day. FS21 is in line with the NextGen Vision, using existing technology to provide important and tangible operational benefits now and in the future to users of the NAS. SolaCom was named the winner at an awards luncheon at the 53rd Annual ATCA Conference and Exposition last week in Washington D.C.
The Government Electronics and Information Technology Association published a study in 2003 whereby they envisioned a FS21-like system being deployed in the NAS by 2010. In February 2005, following a 14-month study to compare the cost of providing flight services by the FAA versus the cost of contracting services to commercial organizations, the FAA awarded Lockheed Martin the FS21 project. It was estimated that the FS21 program would allow the FAA to save approximately $2.2 billion in operating costs over the next decade. In November 2006, SolaCom and its voice communication technology were invited to participate in the project. The decision was based on SolaComs switching technologya revolutionary hybrid architecture that made the best use of cutting-edge technology for safety, reliability, and cost management. The project was driven by the FAA which imposed a critical schedule, budget and strict operating constraints. Design and implementation of the system would prove to be major challenges since the system could not be shut down during transition. As well, the concept had to be proven before implementation with safety and reliability being the top priorities. Incredibly, the FS21 digital VCS platform designed by SolaCom was engineered, tested and installed in less than a year and fully operational by mid-2007. Today, as many as 15,000 calls are being handled by the system every day.
Charles E. Varnell was born in Dallas, Texas on March 11, 1931 and served in the United States Air Force as a Radio/Radar Operator. After military service he worked for North American Aviation, the Whittaker Corporation and Litton Industries before opening his own consulting business in 1972. Mr. Varnell became a member of ATCA in 1969 and over the years was a diligent worker and supporter of ATCA and its objectives. His many contributions to ATCA and accomplishments in support of the National Airspace System are legendary. As a member Mr. Varnell was always active in ATCA sponsored symposia, meetings/convention activities and willingly supported personally and financially any activity which contributed to the benefit of ATCA and its members. Charlie was awarded an ATCA Honorary Membership in 1999. Charles E. Varnell died on August 2nd, 2000.
ATCA has been one of the premier organizations dedicated to the advancement of the science and profession of air traffic control for over 50 years. Members are drawn to ATCA because of its national and global influence, its dedication to the progression of ATC, ATM, aviation and aeronautical sciences, and further industry policy developments. To learn more visit www.atca.org.
A privately held corporation headquartered in Canada's national capital region, SolaCom Technologies, Inc. has acquired more than 25 years of knowledge and experience engineering some of the world's most reliable critical communication systems. With the structure and broad expertise to execute customized solutions into a powerful set of communication tools, SolaCom enables interoperability over any network infrastructure in air traffic control, homeland security, public networks, military C4I, marine communication, emergency response, and other mission-critical applications. For further information Antonio Cassandra (613) 693-0641 x297 acassandra@solacom.com