Thales, Drones-Centerand ZenT have conducted a demonstration flight with a drone powered by hydrogen fuel cell technology. The tests were organised to demonstrate the industrial and operational feasibility of this hydrogen drone, which offers enhanced performance characteristics while protecting the environment.

Drones used in professional applications need to combine operational efficiency with the highest levels of flight safety, with their range capabilities and endurance as key criteria. Various propulsion technologies already meet these criteria, but hydrogen fuel cells are a particularly effective way to increase the drone's endurance due to the low mass and high energy density of hydrogen.

The new generation of drones powered by hydrogen fuel cells will be capable of flying significantly longer missions, which are not possible today. Ultimately, they will fly for up to 3 hours with a payload of 3 kg, meeting the needs of 90% of all sensitive site surveillance and industrial inspection applications.

The tests demonstrated the drone's capacity to fly for at least 2 hours with a hydrogen fill time of no longer than 1 minute. As well as reducing time between flights, the hydrogen drone delivers uniform performance throughout each flight, which is not the case with battery-powered systems.

The fuel cell can be mounted on the drone in the field, and the drone is designed to offer the flexibility needed to quickly configure payloads for different types of missions.

For the demonstration flight, the ScaleFlyt Geocaging solution was installed on the drone to ensure regulatory compliance. This Thales solution combines expertise in robotics, security technologies and certified avionics systems to deliver highly reliable flight containment capabilities for drone operations. Developed with support from the French civil aviation authority (DGAC), ScaleFlyt Geocaging guarantees that the drone remains in a designated area throughout the flight. 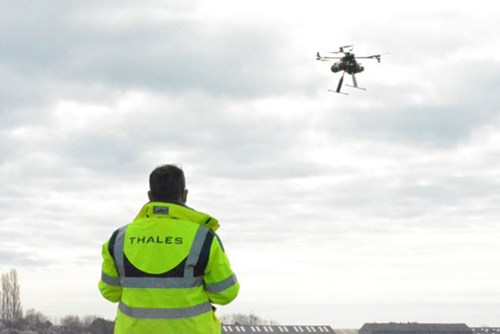