The latest report from the UK Airprox Board (UKAB), covering the first six months of 2008, was published today. Of the incidents reported by pilots and air traffic controllers as occurring in the period January to June last year, 87 were subject to full investigation and assessment. 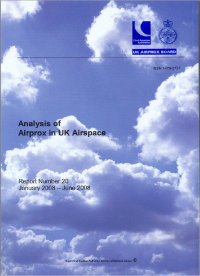 The half-yearly total represents 12 more incidents than for the same period in 2007, but fewer than recorded for the same period in both 2004 and 2005. In January June 2008, there were 38 incidents involving at least one commercial air transport aircraft. Of these, none were judged to be Risk Category A the categories are explained below - and just two were deemed to be Category B, defined as safety not assured. Less than 6 per cent of the incidents involving civil airliners, therefore, were assessed as risk bearing. Looking at the overall picture, there were five Category A incidents and a further 21 Airprox were classified as Category B; 57 Category C; and four as Category D. UKAB reports - produced jointly for the Chairman of the Civil Aviation Authority and the Chief of the Air Staff, Royal Air Force - are principally intended for pilots and air traffic controllers, both civil and military. The purpose of the reports is to promote air safety awareness and understanding by identifying and sharing the lessons arising from UK Airprox incidents. Todays report is available on the UKAB website www.airproxboard.org.uk (click on Publications>Analysis of Airprox in UK Airspace>Jan-Jun08 Report No20)
your benefits?