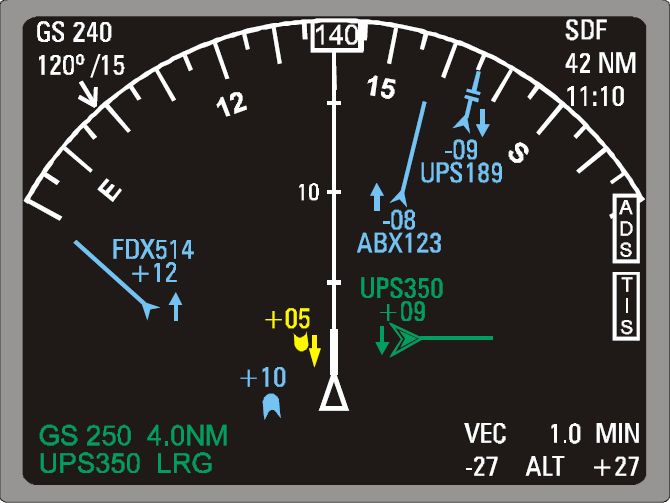 That same year, the FAA began its historic Capstone program in Alaska, under which hundreds of mostly general aviation planes were equipped with the equivalent of ADS-B/In with a cockpit display of weather and air traffic. With enthusiastic GA support, Capstone is now being expanded to 4,000 Alaska planes. Overseas, IATA loves ADS-B, CANSO loves ADS-B, and aggressive ADS-B programs are under way in Canada, Australia, and Southeast Asia/Pacific. So how come the FAA dropped the ball earlier this year, by proposing a far-off deadline of 2020 for equipping planes with just ADS-B/Out, leaving the real benefits (ADS-B/In) for those who must pay for this equipage to some vague future date? And even though the whole network of ADS-B ground stations will be completed by ITT by 2013? Ive been puzzling over this for several months now, interviewing experts and reading extensively. For the United States (the lower 48), this turns out to be a massive coordination problem, and its one that our politicized FAA is not in a good position to resolve. First, recall that the business case for ADS-B rests on being able to retire a large fraction of the FAAs huge network of ground-based radars, which are costly to maintain and would be very costly to replace as they wear out. But you cant shut down those radars until everybody in the relevant airspace is equipped with at least ADS-B/Out, so that the ATC system (at least) can see where they are. Because aircraft owners balk at being forced to buy and install new gear until they get real benefits from it (and this is especially true of GA owners), FAA felt under strong political pressure to make the deadline as far off as possible (hence, 2020). And since they know that adding a cockpit display unit (to enable ADS-B/In) will be even more costly, they declined even to speculate on what that deadline will be. So to the user community, the package spelled all costs but no benefits, leading to a flood of negative comments in response to FAAs notice. The places where there is a near-term business case are of two kinds. Mostly they are in places where there is no radar coveragemost of Alaska, the Gulf of Mexico, northern Canada, over the North Atlantic, in the South Pacific, and over much of Australia. In those locations, ADS-B offers much better real-time information for ATC as to where planes are, which means todays huge spacing requirements can be reduced. That produces user benefits, such as more direct routings and optimal altitudes for reduced fuel burn, even if only ADS-B/Out gets implemented initially. The other case is cargo hubs (such as Louisville and Memphis), where at night nearly all the planes are cargo planes. With fleetwide equipage (ADS-B/In), those cargo carriers can increase landing rates enough to justify the equipage costs. In Alaska, the main benefit is greater safety, but for that the cockpit display is an integral component. For the initial phase involving several hundred airplanes, the FAA paid for the ADS-B boxes, and all involved learned a great deal from the pilot program. For the planned major expansion to 4,000 planes, FAA is trying to get the state to kick in to pay the large majority of the equipage cost. The onboard equipment, in volume production, is estimated at $12-18K per plane, of which the owner/operator would be paying about $2,500. Whether the state funding would be a grant or a loan is still being debated. FAA will be paying for the bulk of the ground stations statewide, as it is doing in the lower 48. The hugely negative response to the FAAs ADS-B/In equipage proposal has resulted in the problem being thrown back to the Aviation Rulemaking Committee, a group of aviation stakeholders charged with advising FAA on this issue. Whatever they come up with this fall will likely influence a revised FAA notice of proposed rulemaking (NPRM), which will probably be released early next year. And we can be sure that if some category of user doesnt like the result, they will complain to Congress, which will try to micromanage the result via control of the budget process. Imagine, instead, that a balanced group of aviation stakeholders, instead of just being an advisory body, constituted the board of directors of a self-supporting ATO (or AirNav). It would be in the interest of all those board members to resolve this coordination problem, so as to achieve the cost savings from retiring numerous radars before they need to be replaced and to gain the improved safety and capacity resulting from cockpit displays of weather and traffic. They would therefore have powerful incentives to work out some kind of a deal to bring about rapid implementation of not only ADS-B/Out but also ADS-B/In. This might well involve the ATO helping some GA users pay the costs of equipage. But very large volumes of ADS-B boxes and displays would also mean large economies of scale in production, driving down unit costs, and making the whole endeavor less costly. It will be interesting to see whether any of the commercialized ANSPs, such as Nav Canada or Airservices Australia, comes up with such a win-win approach to rapid implementation of ADS-B.
your benefits?