Paris-CDG arrivals: more than 50 commercial inbound flights to Paris-CDG airport have successfully tested the xStream arrival management procedure at a horizon up to 350 nautical miles from March to October 2018 during the peaks of arrivals. Flight efficiency and capacity in extended terminal sectors were notably increased.  Zurich and Paris arrivals: additional trials on pre-departure constraint optimisation demonstrated the benefits of advanced cooperation between the Network Manager and the local arrival manager for improving flow management procedures and reducing ground delays. 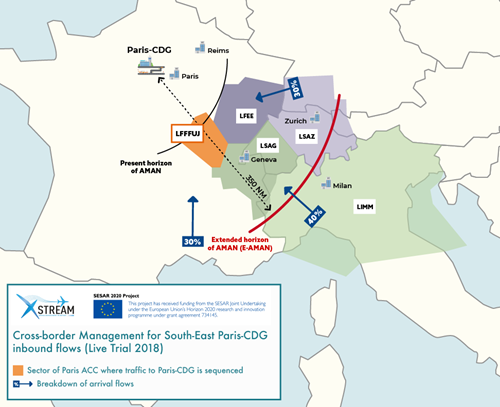 After a successful trial in Paris-Orly in summer 2017, xStream (cross-border SESAR trials for enhanced arrival management) continues on its track towards bridging the gap between air traffic flow and capacity management (ATFCM) and queue management. The first trial tackling South-East Paris-CDG inbound flows explored further the benefits of extended AMAN. Supported by a sequencing tool (iAMAN), a collaborative process was implemented between Paris, Reims, Geneva, Zurich and Milan Area Control Centres (ACC) to smooth arrival peak traffic and mitigate controllers’ workload in the extended terminal sectors in Paris ACC. With greater predictability of the arrival sequence, the objective is to initiate pre-sequencing of arrivals ahead of a detected congestion in Paris ACC. This process enables delay absorption earlier in the flight, up to two ACCs ahead of Paris terminal sectors, at their cruise altitude, improving the arrivals’ flight efficiency, in terms of fuel consumption and flight profile. Initial feedback on the procedure is largely positive with 80% of Paris controllers and the flight management positions (FMPs) agreeing that procedure brings operational benefits and is a future enabler for increasing arrival capacity in Paris ACC terminal sectors and in Paris-CDG.

From May to October 2018, two other trials were performed in Zurich and Paris in the wake of the iStream project to further explore the benefits of optimising target time of arrival (TTA) at congested airports. Building on a web service based on system-wide information management (SWIM) developed by the Network Manager (NM), DSNA and skyguide developed their own ATM tool to automatically coordinate TTA requests with NM in order to enhance NM flights profiles and optimise air traffic flow and capacity management (ATFCM) constraints. This new process was experimented on both classical and mandatory cherry-picking regulations. By better matching traffic demand with local constraints, delays were reduced in Paris by 5% without impact on safety management by ATCOs. These two demonstrations show how a better collaboration between ACCs and network can benefit to arrival flow management.

xStream is a project led by DSNA, the French air navigation service provider, in collaboration with its partners : COOPANS, DFS, EUROCONTROL, NATS, skyguide ; SEAC (SESAR European Airports Consortium) ; AT-One and Indra. xStream is one of several large-scale demonstration activities of SESAR 2020, aiming at delivering ready-to-be operational, innovative solutions. Demonstrations consist in flight trials in Paris, Zurich, London and Frankfurt areas, and involve the largest number of upstream ACCs. The project is co-funded by the SESAR JU within the framework of Horizon 2020 (No 734145).