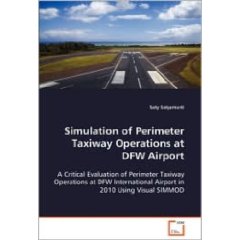 The FAA and the DFW airport had proposed a Perimeter Taxiway (PT) system to improve runway safety and reduce runway incursions. The PT is analyzed utilizing actual flight data from the FAA and DFW database for 2004. An estimate was made for air traffic operations in 2010 from the FAA forecasts. Runway assignment was based on runway use plan and the standard taxiway route suggested by ATC. North and South flow was simulated separately in Visual SIMMOD, for a total of sixteen simulations to assess the operational procedures and constraints. Flight track data for one day in 2001, 2002, 2003, 2004, and 2005 was obtained to conduct a statistical analysis and determine the height of aircraft overflying the proposed centerline of PT during departures and arrivals. The risk factor was computed to test the Obstruction Free Zone criteria established by the FAA for arrivals and departures. The VS Animator was used to visually track the path of each aircraft on the airfield. The VS Reporter was used to assemble results for runway crossing delay, taxiway travel time, gate assignment, arrival and departure rate per hour, and airport performance