This article originally appeared in the ATC Network Special Bulletin'CDM' - December 2011. To read the complete publication go to:
http://www.atc-network.com/cdm

On target & as agreed in the CDM@AMS MoU of 23 October 2009 , as of 17 November 2011 CDM@AMS reached locally implemented status by sharing all five major Airport CDM milestones! To share this landmark & to offer an alternative opportunity to share 2011 CDM best practices, we hosted a EU CDM seminar, which was attended by ~50 delegates from ~15 CDM teams, EUROCONTROL, ACI EUROPE, Research Institutions and Industry (CDM systems suppliers & consultants). This 1st EU CDM SEMINAR will most likely be continued March/April 2012 under the coordination of ACI EUROPE, at/near ATC Global, next to new EUROCONTROL CDM Procedures & Harmonisation group, which was announced at the first Airport Operations Team meetiong on November 8, 2011. 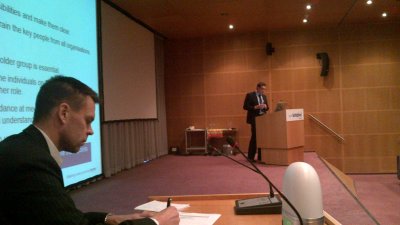 After a short welcome by host Etienne van Zuijlen on behalf of the CDM@AMS team, summary of program of the day and introduction of all delegates the meeting was kicked off with an alternative key-note on behalf of the CDM Boards, a viewing of CDM@AMS, the movie.., which also serves as a best practice in CDM Communication and Introduction/Training, next to the very recently launched EUROCONTROL eLearning zone on Airport CDM.(see News Page of this magazine).

The first session on CDM Governance: Memorandum of Understanding & Conditions of Use best practices was introduced by Mark Burgess, CDM Program Manager for LHR. Mark stressed the importance of agreeing on an MoU as one of the initial steps in a successful CDM Program, including a clear and strong governance, addressing all stakeholders. He also highlighted the Conditions of Use and some of the special conditions the Heathrow CDM Team has had to cope with.Timo Suorto, CDM Program Manager for HEL, continued in this session, sharing the Helsinki experience on agreeing on an MoU, which is listed as the example in the current edition of the EUROCONTROL CDM Manual. Again, some of the local specialties were addressed by Timo. The first session was closed by Etienne van Zuijlen, CDM Program Manager for AMS; he echoed the best practices from LHR and HEL on these administrative, but very important areas of managing a local CDM Program. At AMS, the MoU was drafted & signed within 6 weeks after restarting the CDM deployment Program with a new full time Program Manager in fall 2009. By sticking very close to the CDM Manual and avoid using legal departments as much as possible for limiting conditions, it was resolved in a matter of weeks and signed of by executive levels, including a strong governance. Same approach was used for the CDM Conditions of Use, building on example of LHR, and using professional external legal ICT expertise to resolve issues on data ownership & sensitivity of sharing.

Second session on CDM WinterOPS, De-Icing & CDM Cell best practices was kicked off by Harmen Abma, sr R&D Adviser at NLR; Harmen presented the approach and experiences of organising joint (CDM style) Winter-exercises since 2005 (4 series of exercise, with multiple days during each year) on behalf of LVNL, KLM and Schiphol Airport. He addressed the need/background (sudden snowfall March 2005 at Amsterdam with servere disruptions), the lessons learned and how this could be re-used for other EU airports.

Both speakers introduced the concept of CDM Reporting and using (locally agreed) KPIs, fit for purpose and phase of the CDM deployment program, as a key enabler for establishing CDM at an airport and continue making the best use of it, improving where possible/needed. It was highlighted that especially harmonisation of the major KPIs around TOBT and TSAT is still work in progress, since not many best practices have been shared. The Seminar concluded this area of work should be addressed by the new EUROCONTROL Procedures & Harmonisation Group to be started in 2012.

It was also concluded, after questions from and discussion with the audience, that these CDM KPIs should be used in EU Performance work under EU 2010/691, and should overwrite the more theoretical KPIs produced by the PRU in the ATMAP arrangements, which are not all supported and recognised to have much real practical value by the CDM and airport operations Community. 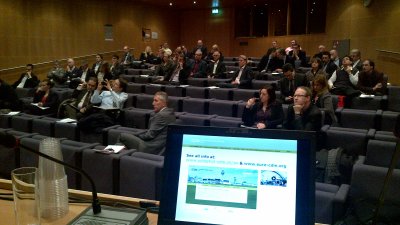 The session was kicked of by Bas van der Raadt, chief ICT Architect of Schiphol Group, who presented on the ACI World led initiative of ACI Airport Community Recommended Information Services (ACRIS), and the Proof of Concept project on A-CDM Webservices; Bas explained how the ACI World IT Standing Committee, consisting of 17 major Airports, 5 World Business Partners such as SITA, T-systems and others, IATA and two Airlines are aiming to adress present and future challenges and opportunities, and why A-CDM was chosen as PoC project, to be ready by Q2-2012. His presentation generated quite some positive debate.

Hans Koolen closed this session 4 with an introduction to exchanging DPIs & receiving FUMs from the EU Network manager, which are importants steps in a local CDM Deployment. On this topic there was also interaction with the audience, understanding when is the best time to start/do what.

Fifth and closing session on CDM Program Management best practices & lessons learned was moderated, as a final session before his retirement in December, by Marc Matthys of CDM@BRU. He was joined in the panel by Mark Burgess of LHR, Timo Suorto of HEL and Etienne van Zuijlen of AMS. Marc was thanked by all for his invaluable contributions over the last decade.