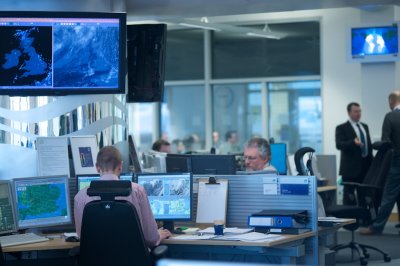 The Met Office works across the aviation industry to keep passengers safe and operations running smoothly. Here, David Gibbs, Aviation Business Manager describes how a pilot would typically use weather information and services from the Met Office for a long-haul flight from the UK to Sydney, Australia. From pre-flight planning, through take-off and landing, to returning home, critical weather data is shared by people and agencies across the sector and shows Airport-Collaborative Decision-Making (A-CDM) in action.

Q. What are the pilots main concerns as he arrives at the UK airport?

A. On arrival, the pilot will need to know which aircraft he has been assigned and its stand number. Hell also have the route in mind, as well as the quantities of passengers, crew and luggage all of which affect an aircrafts efficiency and, therefore, the amount of fuel required. Most importantly, the pilot will want to know about the weather he may encounter en route. The airport receives significant weather charts from the World Area Forecast Centre (WAFC) London, run by the Met Office from its Operations Centre in Exeter. This important safety information includes where an aircraft may encounter weather such as ice, turbulence, lightning, hail and volcanic ash above 24,000 feet and the position of the jet stream. Using this data, a pilot will know when and where inclement weather will occur and decide if any extra fuel should be taken onboard to fly around it.

Q. The weather obviously affects operations at UK airports. How is the pilot briefed on whats happening on the ground?

A. The types of weather that have the greatest impact on airports in the UK are fog, snow and ice. Fog and snow affect visibility and all can cause flights to be delayed or cancelled. Snow falling during the day is less of a challenge than snow falling overnight. This is because the constant movement of traffic in the daytime, around the stands and on the taxiways and runways, helps to clear the snow away. But when an airport closes overnight, snow can build up and affect operations the following morning. During cold weather, ice can form on the wings of aircraft and seriously threaten safety. In winter, airframe icing can be a major cause of delays for airlines. Observers and equipment provided by the National Air Traffic Service (NATS) will keep the airport briefed regularly on whats happening on the ground. To stay on top of changing conditions further ahead particularly in cold weather when aircraft and runways may need to be de-iced OpenRunway and the Aircraft De-icing service from the Met Office can help. They provide weather information via a website for up to five days ahead, while a Met Office forecaster is available around the clock for extra help in making decisions when conditions are marginal. 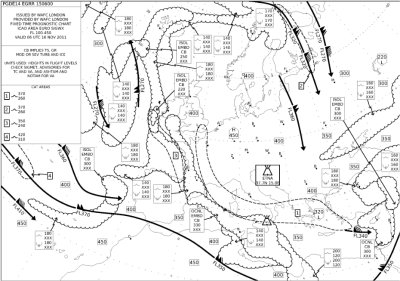 Q. How is the pilot briefed on the weather in Sydney, especially if its forecast to change while hes in flight?

A. Local forecasts for airports are known as TAFs an acronym of Terminal Aerodrome Forecast or, in some countries, Terminal Area Forecast and cover a five-mile radius from an airport for up to 30 hours ahead. For airports in the UK, these are produced by the Met Office to a format that is shared and understood across the world. Current weather information such as the temperature, wind speed and direction, precipitation, cloud cover and heights, and visibility is typically provided once an hour in METARs or Aviation Routine Weather Reports. These are also produced by the Met Office for UK airports to a format set by the International Civil Aviation Organization (ICAO). With an average non-stop flight time from London to Sydney of 21 hours, TAFs and METARs provide pilots with critical weather information as conditions can change dramatically over this period.

Q. What information does the airline receive to help the pilots flight planning?

A. Although there is a strong commercial imperative to fly, airlines and pilots operate a safety first policy. When flight cancellations occur, theyre more likely to be due to the weather than mechanical or scheduling problems. When it comes to the weather, decisions to fly or not to fly are made by the pilot in consultation with his airline using information provided by the Met Office. The significant weather charts provided by WAFC, London are critically important here. To further aid flight planning, the Met Office supplies information on the weather at airports anywhere in the world through an online briefing service called ClearFlight. As soon as the flight plan from the UK to Sydney has been drawn up it is registered by NATS on a worldwide online system.
Q. How close to take-off is the pilot briefed on the weather?

A. On the flight deck, the pilot is kept up to date on the weather at his home and destination airports by NATS. This is especially important if conditions are marginal in this example, for either take-off in the UK or landing in Sydney. In fact, the weather will influence the advice given to the pilot right up until the aircraft is pushed back on to the taxiway, as NATS assigns runway slots according to the direction and speed of the wind.

Q. What in-flight weather information does the pilot receive from air traffic services?

A. While his aircraft is within UK airspace, the pilot receives in-flight updates on the weather from NATS. The pilot then contacts the air traffic services of other countries as he enters their airspace, or flies over expanses of ocean under their jurisdiction. In this example, the air traffic service in Sydney will alert the pilot to any weather issues as conditions may change significantly while hes in flight. Conditions on the ground have to be relatively severe for a diversion to be advised, in which case the airline is responsible for deciding where to land the aircraft instead. However, if everything goes according to the flight plan, Sydney will brief the pilot on the wind speed, direction and visibility at the airport and assign a runway slot for landing. Each stage is repeated including weather briefings on the ground, pre-flight and in flight on the pilots return journey from Sydney to the UK, with significant weather charts provided by the Met Office through WAFC, London even though the pilot is on the other side of the world.

Q. How does A-CDM help to keep airport partners in the same operational picture?

A. A-CDM involves airports, airlines, ground handlers and air traffic services working together more efficiently and transparently by sharing data in real-time. With the ever-greater need for efficiency and growing green concerns, such as reducing carbon emissions, A-CDM has the potential to increase capacity while reducing costs and the impact on the environment. Adverse weather is one of the most significant threats to performance across the aviation industry, making shared weather information key to achieving a common situational awareness. To get key influencers across the industry talking about putting A-CDM into practice beyond the weather, the Met Office is proposing a roundtable discussion on this hot topic in early 2012.
administrator ATC Network