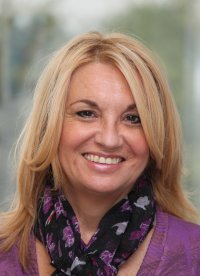 What has been the impact of Airport CDM over the last ten years? How far have we gone? What if it had never been materialised would it have had to be invented in another way? These are a few questions I will try to answer as an obligation to myself for this ten year anniversary.

Initially, the concept met with a fair amount of scepticism even amongst EUROCONTROL management! At the time Collaborative sounded more like a philosophy or an ethical must do that all projects should naturally follow.

The first time that CDM was presented as a potential Work Package of EUROCONTROLs newly formed Airport Unit, was in January 2000. This was followed by several proposals at meetings of our stakeholder group the Airport Operations Team, informal CDM meetings and finally the Draft Terms of Reference for a CDM Task Force at AOT/6 in December 2000.

It took an additional year to convince everyone that Airport CDM was not just a philosophy, system, hardware, software, meeting or telephone call. It required procedural changes, sharing of sensitive data based on operational requirements and defined processes for all airport partners. Given that, it merited a Task Force where stakeholders would come to an agreement and often compromise their needs on specific requirements for information sharing. Finally it became clear that an Airport CDM project was required in order to develop, validate and implement specific CDM elements. The ToR for the establishment of a CDM Task Force were approved in Autumn 2001, some 22 months after conception...

At the time some used to say CDM was a religion you either believed in it or not. A few of the early believers who became members of the CDM Task Force are shown in the picture. Representatives from Brussels and Barcelona airports are seen; the first opened its doors for trials, the second developed an Airport CDM prototype, in conjunction with our experts in the EUROCONTROL Experimental Centre in France. Both contributed extensively to the formation of the current Airport CDM Concept elements. 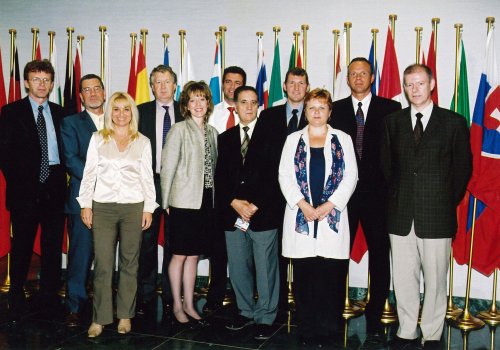 CDM Pioneers meeting in Brussels in 2001

The first official CDM TF meeting took place on 12 Dec 2001. The TF meetings, which happened twice per year (13 in total), soon gained a lot of popularity and grew to around 130-150 participants, when it became apparent that it could not function as a work group anymore. So it was replaced by the A-CDM Coordination Group (meeting annually) and the Procedures Group (limited to 30 participants).

The first A-CDM CG took place in Nov 2007 as an open forum for airports and industry for exchanging views, learning lessons and getting informed on updates and on latest developments. The group is now well appreciated, hosting biannually an exhibition of CDM support tools and services by external companies. The latest Coordination Group meeting in November 2011 at EUROCONTROL headquarters in Brussels has a focus on sharing the experience on implementing CDM gained by the many new airports which have embarked on this adventure.

The most important outcome of stakeholders work of the last ten years (a real learning experience given the fact that A-CDM is an original concept) is the A-CDM Implementation Manual. This provides comprehensive information on how to set up A-CDM at an airport.

It also includes an impressive Cost Benefit Analysis estimating that the ratio of benefits to costs will typically be of the order of nine to one. In fact, this ratio was later proven to be conservative in practice, with Munich doubling or even tripling this ratio.

Other key outcomes included the EUROCAE Specification documents and the Community Specifications, which were published in the EU Official Journal in June 2010.

A-CDM training courses take place at EUROCONTROLs training institute in Luxembourg; Train the Trainer (provided locally) and E-Learning packages assist airports in implementing CDM, by educating operational staff on the new procedures and processes, helping them to develop a proper understanding so as to make the required cultural changes.

The first airport to believe in Airport CDM and strictly follow the bible (the A-CDM Implementation Manual), was Munich airport. Full CDM implementation was completed in June 2007 through linking their airport with the ATM network via DPI (Departure Planning Information) messages sent to EUROCONTROLs central flow management unit (now part of the Network Manager). Very soon the first tangible positive results came out, such as reduced taxi times, better ATFM slot adherence and other important benefits which are reported by the Munich CDM partners in every detail in yearly reports.

Brussels had started implementation in the very early days, led by an active but very democratic CDM work group, so implementation was completed only in June 2010. Unfortunately the Barcelona prototype has not yet become operational, proving in a way that Airport CDM cannot exist just by sharing data elements it needs the agreed commitment on procedures and processes between all concerned partners at an airport.

However, recently Spanish airports signed a Memorandum of Understanding with local partners for implementing CDM in Madrid, Palma and Barcelona airports.

Paris CDG was the first hub airport to adopt full CDM in November 2010; Frankfurt followed in February 2011. Heathrow, Amsterdam, Helsinki, Prague, Vienna, Berlin, Gatwick are also in the pipeline to link with the ATM network during 2012. National implementation policies, such as the one to implement CDM in a coordinated manner in six German airports, are excellent initiatives. More detailed information on the CDM implementation stages for more than 30 airports in Europe can be found on http://www.euro-cdm.org/airports.php.

Finally to answer my original questions:

How far have we gone and what has been the impact of Airport CDM in the ATM environment?

Probably I would say not far enough, if we consider the fact that, so far, full Airport CDM has been implemented in only a very few airports. It is a fact that it remains low priority for local management despite the proven benefits. Also, while it should not be important that there is not yet an EU mandate on A-CDM, unfortunately this is a significant factor.

On the other hand, the positive impact on both airport operations and the ATM network has become apparent. Often operational staff will tell us: I would never go back to the way I used to work before CDM was implemented or when you start CDM there is no way back. Airport CDM has won over even those who at first were sceptical. In fact, Airport CDM now is a cornerstone for future developments such as SWIM (system wide information management) and the 4D trajectory management concept of SESAR. These and other airport related projects could never materialise without first establishing the foundation of collaboration and transparency of information.

If Airport CDM had never materialised, would it have had to be invented in another way?

We could have continued without A-CDM, or something very like it, but only if: