The Falconer Project: ATIS contributes to keeping the skies over the Kingdom of Saudi Arabia safe 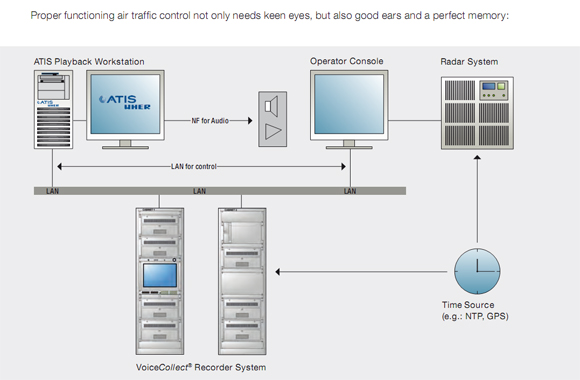 A recording system for more than 600 voice channels was installed in each of the control centres in Riyadh and Jeddah and integrated into the existing infrastructure. ATIS decided to use the following configuration to take into account the special requirements and specifications of the GACA: two 19-inch racks for each control centre with multichannel recorders from the innovative VoiceCollect series in combination with a powerful workstation PC for synchronously reproducing the EUROCAT-X radar data. In accordance with the customers specifications, a fully redundant overall system with analogue and digital interfaces was supplied. For providing additional data backup, ATIS integrated a RAID L1 hard disk into the system on which all data recorded are mirrored. This means that all the information is subject to triple backup. Redundancy is also ensured by means of an n+1 configuration, which always involves connecting one system more than is actually required for recording purposes. In this way, defective equipment can be easily replaced at all times, thus ensuring continuous, uninterrupted recording. With the Falconer Project, ATIS has proved once more that not only the products of German falconries enjoy great popularity in Saudi Arabia, but also those of German high-tech companies. At the same time, ATIS has made an essential contribution to ensuring the safety of the countrys air traffic.
The General Authority of Civil Aviation (GACA) is the central organisation responsible for civil aviation in the Kingdom of Saudi Arabia. With the general modernisation of airports in the desert state during the past years, the GACA made a substantial contribution to meeting international standards, thus ensuring unprecedented growth and an enormous increase in the quality of the countrys civil aviation. This resulted in significant improvements being made in the sectors of passenger transport, air cargo, infrastructure, airport and radio navigation equipment as well as air traffic control.
For the purpose of optimising air traffic control in Saudi Arabia, the national area control centres (ACCs) of Riyadh and Jeddah are to be equipped with an advanced voice recording system. In this way and in the interests of keeping air traffic running smoothly, GACA intends to document the entire relevant communication at the airports in a reliable and legally admissible manner. This task involves implementing a redundant, fail-proof system, which meets the highest safety standards. In addition to providing pure voice documentation, the system is also expected to allow the data from radar surveillance to be reproduced synchronously in order to ensure complete reconstruction of scenarios. This means that complex scenarios can be documented and logically verified without any gaps.
Air traffic control at Riyadh and Jeddah ACCs uses voice communication systems supplied by the Swiss company Schmid Telecom AG as well as the EUROCAT-X radar system developed by the Thales Group. Both systems have a large range of voice channels with various analogue and digital interfaces which have to be integrated into the ATIS system.
your benefits?