SITAONAIR has successfully expanded the operational capacity of air traffic service (ATS) datalink across Brazil’s airports, in a crucial step towards modernizing air traffic control operations in the country as air traffic continues to rise.

The development of the service follows SITAONAIR’s instrumental work with Brazil’s Department of Airspace Control (DECEA), as part of the wider Brazilian Air Navigation Modernization SIRIUS program to advance ATS Datalink services. The deployment of services for The Commission for the Implementation of the Airspace Control System (CISCEA) to 24 control towers across Brazil began in June 2016, ahead of the Olympic Games in Rio de Janeiro. Since then, the initiative, in partnership with SITAONAIR’s specialist air traffic control partners Saipher and ATC Systems has continued to evolve, increasing safety, sustainability and operational efficiency.

As a result, DECEA has seen an increase in aircraft opting to access voice and datalink ATIS (D-ATIS) as well as DCL (Datalink Departure Clearance Service) information in a more digital, convenient and secure manner, with approximately 250 departure clearances issued a day and 20,000 D-ATIS requests a month from the country’s major airports.

The implementation of these services in Brazil has been embraced by pilots and air traffic controllers alike. Thanks to SITAONAIR’s provision of AIRCOMcats and AIRCOMevatis systems to CISCEA as part of the contract, more than 20,000 D-ATIS pilot requests for Brazilian airports are managed every month from major airlines across all Brazilian airports. São Paulo, São Paulo Congonhas and Rio Galeao airports cover around 50% of the pilot requests.

“This project is a true demonstration of the continued collaboration and success achieved with our customer DECEA and thanks to our various partners in Brazil, in our efforts to ensure operational efficiency and safety in these increasingly busy skies,” comments Dominique El Bez, SITAONAIR VP, Product & Strategy.

According to Francisco Accacio, Program Manager at CISCEA: “We now have a fully-integrated Datalink Departure Clearance Service (DCL) and Electronic Flight Progression Strip (EFPS) environment, thanks to both SITAONAIR’s turn-key ATC tower solutions combined with Saipher ATC’s TATIC (Total Air Traffic Information Control) tower solution. Of course, none of this would have been possible without the expertise and local knowledge of ATC Systems, who not only achieved full installation of the solutions, but supported with training for Brazilian air traffic control operators and maintenance staff.” 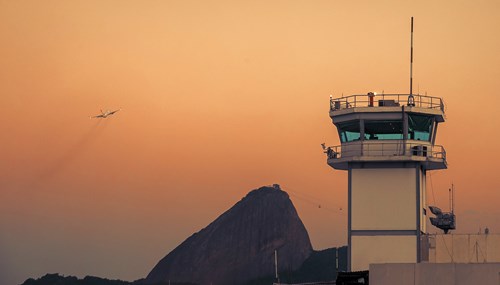